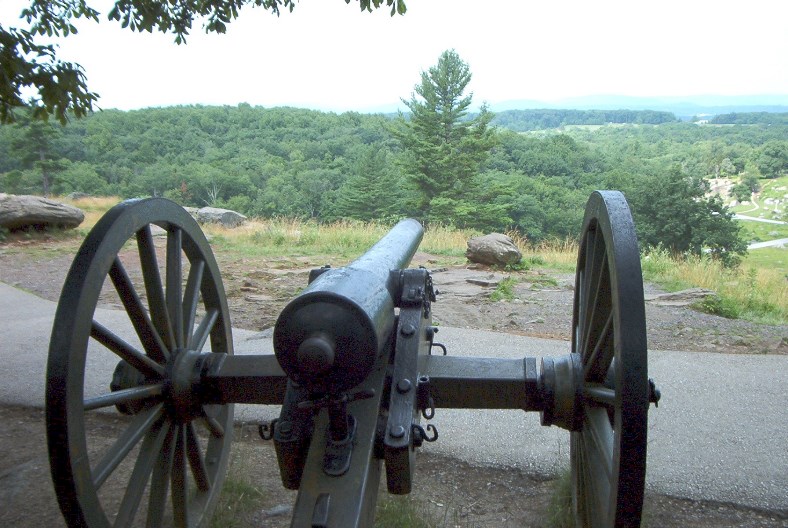 This Tuesday, the last day of June, was the day Franklin Horner and his fellow Union soldiers mustered for pay. They took up the line of march at 7:00 a.m. and marched until 7:00 p.m. covering some 20 miles. As they passed through several towns they uncased the colors—their flags—and had their bands play martial music.

Thomas Ware began their march about 9:00 a.m. It was a short day ending at 1:00 p.m. stopping to camp in the town of Fayetteville. His comrades gathered a large amount of cherries, which were in season in Pennsylvania and, as he put it, “We made fences fly…” for firewood, of course. He has some time to write a letter home.

Horner casually mentions that they marched twenty miles this day, but it was probably one of the hardest marches he’s had to make. They are on the move for twelve hours, which means a lot of it was stop and go before they could go into camp and take a long rest.

Since it is the end of the month, there are some administrative duties each company has to take care of. They determine how many men are present and accounted for so that they can requisition money from the government to pay them for their service. In the Union army, pay was $13 per month.

The end-of-the-month muster also gives us a general—but not specific—idea of the troop strengths at the time. When historians analyzed the muster records, they felt confident in determining the number of soldiers present on July 1, the opening of the Battle of Gettysburg. But there are variables: men get sick overnight, or drop out of the ranks marching the next day. In addition, the muster rolls give only an approximate number of combat troops. There were thousands more non-combatants, from teamsters to farriers to personal servants to “camp followers” who accompanied the armies and remained behind the lines during combat. The total number of human beings being drawn to this part of Pennsylvania as if caught in a whirlpool may never be known; but it certainly was more that the 97,000 Union and 75.000 Confederate combat troop figures we used in the National Park Service.

Once again, the Federals are marching an inside arc to the Confederates’ sweep northward and eastward. The rebels had been reported in York and so Horner’s unit is sent toward the east, always trying to be the buffer between the enemy and their capital. Music playing and flags flying while marching through northern towns were more for the civilians’ benefit than the soldiers. Horner, who had lived through the bloodiest single day in all of American History at the Battle of Antietam, knows he is headed toward yet another, and potentially bloodier battle with one of the finest and most deadly armies on the face of the planet; one that had already whipped his army more than once before. The cheering civilian residents of the towns may not have exactly inculcated Horner and his fellow veterans with confidence.

Perhaps because of the extra free time he has thanks to a short march, Ware’s thoughts turn homeward and he records in a sort of code that he has been using, that he wrote a letter to “J. B. F.” Throughout his diary, Thomas Ware uses his alphabet code to record letters he sends to someone at home. Could it be that he has a sweetheart in Washington, Georgia?

This night, Ware and Horner are only thirty-seven miles apart, a day’s march for each of these American enemies to a collision-point.