Between the end of August and end of October, Pennsylvania was hit by a hurricane, tropical storm and October snowstorm.  The state Public Utility Commission is still reviewing the impact on the power grid.

The PUC held a special electric reliability forum in October.  While the majority of customers had service restored in 48 hours, some people were out of service for days. During a recent house budget hearing, the commission was asked about right-of-way maintenance.

Commissioner Wayne Gardner says trees in the right-of-way are not the only problem.  He says on average more than 40% of the time customers are without power is due to trees and vegetation outside of the right-of-way.  He says he has personally viewed trees that were out of a right-of-way by some 60 feet that were about 100 feet high and capable of taking down three or four poles at a time.

One state representative suggested that tree and vegetation issues might be better solved locally by a Shade Tree Commission.

People who live or have businesses in Pennsylvania’s disaster declared counties will now get more time to seek help for losses  from Hurricane Irene or Tropical Storm Lee.

December 14th is the new deadline to apply to the Federal Emergency Management Agency for help in recovering from losses from the storms. That’s a one month extension from the original November 14th deadline.

It’s also the new deadline for those who have applied to return their SBA Loan applications, crucial in the next step to receiving assistance.

Through November 4th, over 88 thousand households have registered with FEMA and over 122 million dollars in grants have been approved. Almost 54 million in Small Business Administration loans have been approved for renters, homeowners and business owners affected by Irene or Lee.

FEMA spokeswoman Susan Solomon says you can always turn down the help if you find you don’t need it. The number to call is 1-800-621-3362.

Solomon says there are a lot of people who feel they can take care of themselves and they don’t want to take help away from anyone else.  She says when you register with FEMA, it does not add to or take away from what anyone else might receive in disaster assistance.

Tens of thousands of Pennsylvanians in 28 disaster-declared counties have registered with the Federal Emergency Management Agency in the wake of Hurricane Irene and Tropical Storm Lee.   However, time is running short for anyone else to register if they think they may need help recovering from the storms.  The deadline is November 14th and the application for an SBA loan is also due by that date.

FEMA spokeswoman Susan Solomon says you can always turn down the help if you find you don’t need it. The number to call is 1-800-621-3362.

Solomon says there are a lot of people who feel they can take care of themselves and they don’t want to take help away from anyone else.  She says when you register with FEMA, it does not add to or take away from what anyone else might receive in disaster assistance.

More than 85 thousand households have registered and FEMA has already approved over 115 million in disaster assistance grants in Pennsylvania.

If you’ve been swatting more mosquitoes lately, you can lay some of the blame on Hurricane Irene and Tropical Storm Lee.   The back to back storms left a lot of standing water, where mosquitoes are likely to breed.

Kevin Sunday, spokesman for the state Department of Environmental Protection, says they started noticing more mosquitoes showing up in some of the traps in the north central and south central parts of the state. In one trap, which usually caught 25 mosquitoes, was capturing in the hundreds, and in some occasions in the thousands of mosquitoes.

Sunday says they were seeing about 25% more of the mosquitoes that carry the West Nile Virus before the storms, since the flooding there’s been another increase of about 10%.

DEP has been doing extra control operations across the state to bring the mosquito population down. That effort will continue for another month. PEMA and the state Department of Health had asked DEP to collaborate and do additional sprayings.

Sunday says people can help by eliminating as much of the standing water around their properties as possible. He says wheelbarrows, jammed gutters and even overturned Frisbees can collect enough water for mosquitoes to breed.

Sunday adds that people should also take steps to keep mosquitoes out of their homes, checking to make sure screens are intact. He says wear long sleeves and use insect repellant when you have to work outdoors in the evening when mosquitoes are out. 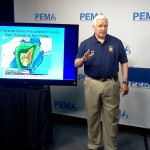 The number of Disaster Recovery Centers has more than doubled since Governor Tom Corbett first made the announcement on Sept. 14th.

Federal and state officials have nearly tripled the number of Disaster Recovery Centers operating in flood ravaged parts of the state.  The number now stands at 18.  FEMA spokesman Eugene Brezany is in the field in central Pennsylvania, and says those DRCs have been busy.  “A lot of people are following up on their application and that’s what we’re there for.”

Between Tropical Storm Lee and the earlier Hurricane Irene, FEMA has received 29,000 registrations from Pennsylvanians seeking federal assistance.  10,000 Pennsylvania applications have been approved and Brezany says $47-million dollars in aid have been obligated so far.  “It’s moving as fast as it can for somebody.  For everybody, it’s probably not fast enough, but we are certainly moving some funds out the door.”

No deadline for applications has been established yet, but FEMA won’t be here forever, and Brezany says the sooner flood victims register, the sooner the process can begin.

The maximum federal grant for disaster assistance is $30,200, but the average runs in the $4,000 to $5,000 dollar range.  “It’s not going to get anybody back to square one, it’s simply designed to get people back on their feet so that they can help themselves,” Brezany explained.  Bills have been introduced in the State Senate, which would pick up where the federal efforts leave off.

Meanwhile, FEMA officials and Pennsylvania flood victims alike are watching the latest political battle on Capitol Hill.  FEMA’s disaster recovery fund is caught in the middle, and could run dry as early as next week.  It’s not clear what the implications could be for PA flood victims.