Craving another cup of coffee to get you through the day?  Not sure if it’s the right move?  Thanks to Penn State researchers, there’s an app for that.  The “Caffeine Zone 2” iPhone app helps people monitor their caffeine consumption relative to adjustable thresholds.

Those thresholds include a minimum level for optimal cognitive performance, a ceiling to tell you when to rein in the caffeine to avoid the jitters or illness, and a low threshold to ensure elevated caffeine levels don’t keep you up at night.  Once you input your caffeine consumption, the Caffeine Zone 2 app turns it all into an easy to read graph.

Penn State professor of information sciences & technology Frank Ritter says proper caffeine balance can be important, but staying in the caffeine zone can be difficult.  “A little bit’s good, and there’s some optimal amount.  “But if you keep going it doesn’t get better, it gets worse instead.”  Mathematically, it’s called an inverted u-shaped curve.

Dr. Ritter teamed up with assistant professor of computer science and engineering Martin Yeh to develop the new app.  It’s currently only available for iPhone users.  There’s a free version with advertisements.  To get the ad-free version, it will cost you 99-cents.

The roller coaster ride that is the 2012 Republican presidential primary season continued Tuesday with votes in Arizona and Michigan. The Michigan primary was of particular interest as it is Mitt Romney’s home state, where his father served as governor.

On Tuesday, Romney got exactly what he needed: a double victory over the surging Rick Santorum. Romney topped Santorum by about 3 points in Michigan and defeated him soundly in Arizona. Newt Gingrich and Ron Paul were distant also-rans in each contest. Santorum’s campaign had stumbled a bit in recent weeks over the contraception issue and his campign tactics in Michigan, which Romney called “a new low.” Santorum funded robo-calls to democrats, urging them to switch parties to vote against Romney. Michigan’s primary is open to all voters, meaning a voter can request either party’s ballot in a primary election.

Santorum vows to continue his campaign. Next up, the Washington state caucuses on March 3rd and then Super Tuesday on March 6th. That’s when voters in Alaska, Georgia, Idaho, Massachusetts, North Dakota, Ohio, Oklahoma, Tennessee, Vermont, Virginia and Wyoming go to the polls.

In budget hearings before the state senate this week, Pennsylvania’s corrections secretary called a bill pending before the house an essential piece of the budget.  Senate Bill 100 provides prison reforms aimed at non violent offenders, including risk assessment and alternative sentencing.

Corrections Commissioner John Wetzel says a piece of their budget involves getting smarter on crime and making better decisions based on data. He says the bill is a vehicle to be able to insert the outcomes of justice reinvestment.    The justice reinvestment initiative is looking at ways to reduce corrections spending and funnel the savings into strategies that can increase public safety.

Wetzel says the state has programs that are not being fully utilized. He says the State Intermediate Punishment Program has tremendous results, but it’s only being used 20% of the time when offenders are eligible. He says it has been shown to reduce recidivism. The overall recidivism rate is about 44%, but the rate for people in the SIP program is 18%.

Wetzel says they’ve been making progress on what they can control, and SB 100 will give them more tools.

It’s up to counties to decide whether to impose the fee, but the PUC will oversee collection and distribution of it, and weigh in on whether local drilling ordinances are reasonable. Powelson says they put together an internal team to look at implementation before the bill even passed.

Powelson says the implementation team already has a draft work plan. Last week, the PUC issued a secretarial letter to all of the affected parties.  In the coming weeks, the commission will issue a tentative implementation order addressing some of the procedures related to their new duties under the act.

There is a 60 day window for counties to decide whether to impose the fee. Municipalities in counties that do not assess the fee have 60 days after that period to petition to have the fee imposed. On September 1st, the natural gas producers will report their well information and the commission will provide an assessment vehicle on the spud fee.   Spud refers to the point at which drilling of a natural gas well actually begins.

Powelson says December 1st is the date checks need to go out to counties and municipalities and that deadline is very important to the commission.  They are looking at outsourcing the collection and distribution of the fee initially.

$72-million may not seem like much in relation to a $27.1-billion dollar budget.  But plans to transfer $72-million out of the Race Horse Development Fund dominated the discussion when Agriculture Secretary George Greig appeared before the House Appropriations Committee on Tuesday.

The Race Horse Development Fund receives 12% of gross slot machine revenues.  That money is in turn used to bolster purses and otherwise support the horse racing industry.   The governor’s budget plan would transfer $72-million from that fund to help pay for agricultural research at Penn State, the University of Pennsylvania’s veterinary center and payments to Pennsylvania fairs.

“The funding that it’s headed toward, I think, is very relative to racing,” Secretary Greig told the House budget panel.  “I think it’s ag helping ag.”

While some lawmakers wondered if it was actually ‘ag hurting ag,’ State Rep. David Millard (R-Columbia) pointed out that the fund takes in more than $5-million a week.  He thinks the horse racing industry will still flourish, even if these dollars are diverted into other agricultural programs.

But the Pennsylvania Equine Coalition fears the transfer would pull the rug out from under the industry.  “People invested millions and millions of dollars in Pennsylvania with the expectation that they’d be able to compete for certain sized purses to recoup their investment and have the chance of making their money back,” spokesman Pete Peterson told Radio PA.

In addition to the newly proposed transfer for agricultural programs, millions of dollars are already being diverted from the Race Horse Development into the General Fund.  Act 1 of 2010 provided for the annual transfers through fiscal year 2013.

Using Penn State as an example, the governor’s office will tell you that the planned spending reductions only amount to 1.5% of its overall budget.  Corman, however, turns those numbers around and points out that the state’s share of PSU’s overall budget would only be 3.8% next year.

In a direct line of questioning with Education Secretary Ron Tomalis, Monday, Appropriations Committee member John Rafferty (R-Montgomery) asked if there’s an effort to privatize the state-related universities.  “No sir, there is not,” Tomalis replied.  “A lot of these decisions, as you know, are budget-driven decisions.”

The three major state-related universities would see 30% cuts in state support under the governor’s budget plan.  The State System of Higher Education would receive 20% cuts, and community colleges’ state funding would be reduced by roughly 4%.  Governor Tom Corbett recently addressed the issue on Radio PA’s Ask the Governor program. 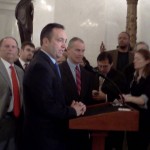 “If we truly want these to continue to be public universities, then I look forward – at the state-related level, at the state system level and at the community college level – to restoring all of these cuts,” Corman said at Monday’s hearing, which focused on the State Department of Education.

On Tuesday afternoon, the State System of Higher Education will sit down with the Senate Appropriations Committee.  Then, the committee has carved out all day Wednesday to meet individually with the four state-related universities.

A new report from the Pennsylvania Health Care Cost Containment Council shows the number of hospital acquired infections and deaths continued to decline in 2010.   The infection rate declined by nearly 6% and the death rate was down over 3 percent in 2010.

Baumgarten says the numbers are going in the right direction. He says hospitals are learning more each year and the medical field is learning more  about how infections are transmitted.

He says the Centers for Disease Control and Prevention has a network that allows hospitals to report infections.  He says the data is used by the PHC4, the Department of Health and the Pennsylvania Patient Safety Authority to continue helping hospitals improve their infection numbers.

Baumgarten says Pennsylvania was the first state to implement a reporting system and has many programs in place to address hospital acquired infections.  He says prevention is a matter of hospital best practices and patient education.

The most common infections are surgery site and urinary tract infections.

The latest Franklin and Marshall College poll shows Senator Rick Santorum with a large lead over Mitt Romney in Pennsylvania.   Poll Director Terry Madonna says the 45% to 16% advantage is evidence the Santorum surge has hit the former Senator’s state.

But Madonna says the race in Pennsylvania is still volatile.  When they asked Santorum and Romney supporters if they planned to stick with their candidate or if they were still making up their minds, 46% say they are still making up their minds.  Madonna says Santorum and Romney are the second choice among the other’s supporters, showing it’s a two person race.

Madonna adds that the November contest could be close in Pennsylvania as well.  In the poll taken this month, President Obama’s lead on Santorum was down to 7% in the state, while Romney trails the president by 8%.

Madonna says Santorum could face problems in a match up with President Obama over his socially conservative positions.  He says those issues were a problem with swing voters in 2006, when Santorum lost re-election to the U. S. Senate to Bob Casey in Pennsylvania.

Madonna says when asked whether President Obama deserves re-election, a majority of voters in Pennsylvania do not feel he does, but that gap is closing. He says the President’s job numbers are getting a little better in the state. The number of voters saying it’s time for a change has slipped under 50%.

Meanwhile, on state issues, just a third of those polled believe Pennsylvania is heading in the right and 56%   feel things are off on the wrong track.

Madonna says when the voters are asked about Governor Tom Corbett’s ability to handle the state’s budget problems, 55% were very or somewhat confident.

Still, 66% strongly oppose reducing funding for local school districts. Madonna says almost half of those polled favor a combination of budget cuts and tax increases to balance the budget. The poll shows strong support for new taxes on smokeless tobacco and cigars.