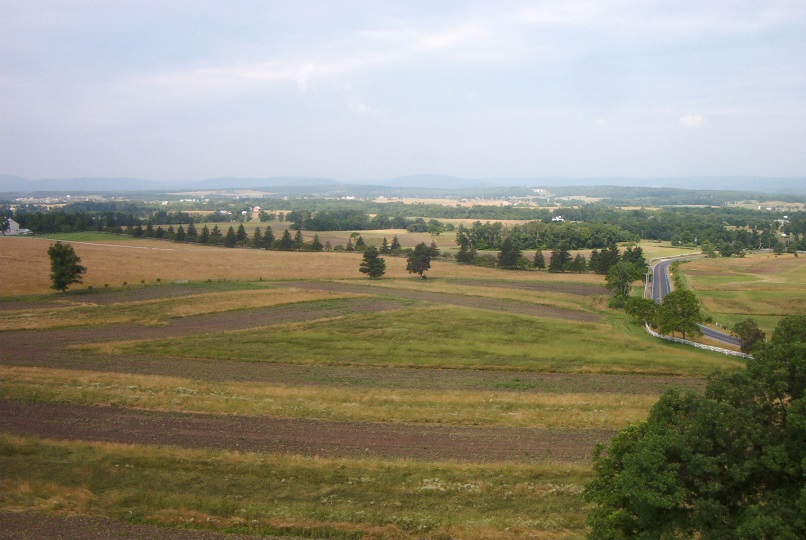 For Franklin Horner, the campaign has begun in earnest. Starting at 6:00 a.m. they march until 1:00 p.m. and encamp near Buckeystown, MD. Horner writes that they have joined up with the Army of the Potomac’s Fifth Corps.

For Thomas Ware, just north of Chambersburg, PA, it is a welcomed day of rest. He writes about the “soldiers taking evry [sic] thing. Camps full of chickens, butter & milk. Our mess had a chicken stew, cherries in great abundance…can get almost any thing at your own price.” He records what a rich country it is north of the Mason-Dixon line and how thickly settled it is. “People all Dutch…Our army living all-together on what we capture. Our advance infantry at or near ‘Harrisburg.’”

The last two days for Ware have been eye-openers. His comments yesterday concerning how many young men in Chambersburg are not in the army must make him realize that there is an abundance of manpower in the north. Even during this huge Confederate invasion, they haven’t been called upon to serve. As well, today’s observations about the agricultural riches in the area must be a harbinger of the importance of making this a successful campaign and a short war, since it appears that the north’s resources are vast.

His comments about the people all being “Dutch” refers to the fact that this part of Pennsylvania was settled by German (“Deutsch”) immigrants. This area and the area to the east are still populated with Hollabaughs, Weikerts, Trostles, Spanglers, Culps (and Kulps) and even a Stoltzfus or two.

My narrative in 35 Days to Gettysburg for this day covers the organization Horner and the men of the 12th Pennsylvania Reserves just joined. It is a template for the way both armies are organized. The 12th Pennsylvania Reserves is a regiment that joins four other Pennsylvania Reserve regiments to form Fisher’s Third Brigade. Two brigades (the First and Fisher’s Third) made up General Crawford’s Third Division. Three Divisions made up the Fifth Army Corps. Finally, the Fifth Corps (pronounced “core”) was one of seven army corps (plus a cavalry corps) that made up the 97,000 man Army of the Potomac.

The same regiment-brigade-division-corps-army organization was employed in the 75,000 man Confederate Army with a few minor differences.

I use all figures guardedly. These are the figures we used when I worked for the National Park Service, and I’ve heard different ones from historians since. The point is, nobody knows for certain.

We used the figure 620,000 men dead from both sides after the four years of Civil War. We used to say that more Americans died in the Civil War than in the Spanish-American War, WW I, WW II, Korea, and Vietnam all added together. We’ve had some wars since, but as if to make the Civil War our most horrible conflict in perpetuity, a historian re-analyzed the census figures and upped the death figure to 850,000.

To make that more relevant to modern times, recall that the country was about one-tenth the size it is today, so you must multiply either of those figure by ten to accommodate for the century-and-a-half of growth. Imagine if one of our four-year wars today cost eight MILLION five hundred thousand American lives. Figures that large are almost too big to wrap your head around. But if you boil is all down to individuals, the tragedy on a family-to-family basis is incalculable.