On this week’s Radio PA Roundtable, a special edition featuring another in our series of profile interviews with the candidates running for the Democratic nomination for United States Senate. This week, meet John Fetterman, the Mayor of Braddock, PA.

On this week’s Radio PA Roundtable, Governor Tom Wolf stops by to talk about the budget, the resignation of Supreme Court Justice Michael Eakin and medical marijuana.

This is “Ask the Governor” for March 2016. This edition was taped Wednesday, March 16th. Topics for this month include:

Click the player below to listen to the entire audio program.

On this week’s Radio PA Roundtable, we continue our series of interviews with the candidates seeking the Democratic nomination for U.S. Senate in 2016 with former DEP Secretary Katie McGinty. 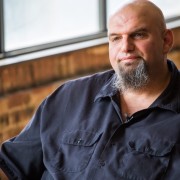 Radio PA & PAMatters.com present the third in our series of candidate profiles in the race for the Democratic nomination for U.S. Senate in Pennsylvania. Today we profile Braddock, Pennsylvania Mayor John Fetterman.

Candidates achieving at least 5% in a major statewide poll were invited to take part in Radio PA’s candidate profile series in the Democratic primary race. Previously, we presented interviews with former Congressman and Navy Admiral Joe Sestak, as well as former DEP Secretary Katie McGinty. You can also listen to those interviews in their entirety here on PAMatters.com by clicking on their names below:

The Pennsylvania primary election is April 26th. The winner of the Democratic primary will face incumbent Republican U.S. Senator Pat Toomey, who is unopposed for the GOP nomination.