With rifle deer season in full swing, the Pennsylvania Game Commission has started taking some samples from hunter-killed deer.   The commission wants to make sure Chronic Wasting Disease, or CWD, has not spread into Pennsylvania.

They’re taking samples of brain tissue from about four thousand hunter killed deer, collecting the samples from deer processors.  Spokesman Jerry Feaser says the testing is even more crucial with the disease found in Maryland.  He says the testing is focused throughout the state, but there’s a special emphasis on counties north of the Maryland line.  These include Bedford, Fulton, Franklin, Adams and York Counties.

Hunters are asked to report deer that are acting oddly or appear to be sick, and not take unhealthy deer. Feaser says deer that have their head or ears drooping down, are drooling or have a thick, rough hair coat could have the disease.

The commission does a random sample to make sure they’re getting adequate representation from across the state.  The testing requires brain matter from the deer. Feaser says for the most part, hunters don’t even know they’re collecting it.

CWD is fatal to deer and other cervids.  There is no treatment for it.   It has not been shown to affect humans. However, Feaser says hunters should still take precautions in the field, such as using gloves to field dress the deer and thoroughly washing knives used to field dress or butcher the deer.  He says those knives should not be used for other purposes. 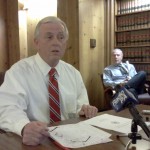 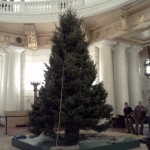 The 22-foot state capitol Christmas tree will be lit on Dec. 6th.

Pennsylvania’s Capitol Christmas Tree arrived in the rotunda Wednesday morning, and was hoisted into place by a team of workers from the Department of General Services.

Over the next few days the tree will be prepped and decorated in time for a tree lighting ceremony on December 6th.

The 22-foot concolor was grown by Strathmeyer Forests in York County, and donated by the Pennsylvania Christmas Tree Growers Association.

The largest shopping mall on the east coast will be getting bigger.   The expansion of King of Prussia Mall outside of Philadelphia will unite the two main shopping venues; the Court and the Plaza.

Simon Property Group spokesman Les Morris says the project will add about 40 new stores, several restaurants, an upscale dining pavilion and customer lounge.  There’s no timetable set yet, because the group is still securing the needed approvals for construction.  He says they showed the plans to local officials in late October, and they’re very enthusiastic about it.

The project comes on the heels of work that’s already underway to convert the former Strawbridge building into a 100 thousand square foot space for 10 retailers, scheduled to open by the 2012 holiday season.

Morris says the timing of the new project coincides with the upcoming 50th anniversary of the mall.  The Plaza opened in 1963.

Morris adds the new project is being fueled by retailer demand.

51-year-old Steven Lloyd of Harding, Luzerne County has claimed the 12th largest prize ever awarded by the Pennsylvania Lottery.  Lloyd describes his winning November 19th Powerball ticket as a random purchase at the Turkey Hill in Exeter.  He used the change from buying his coffee and granola bar to make the Quick Pick purchase.  “I said, oh, just put the five dollars on Powerball,” Lloyd explained during a news conference at the Pennsylvania Lottery headquarters in Dauphin County.

Lloyd had to have his winning ticket validated at the Lottery headquarters on Monday morning.  “The Thanksgiving holiday weekend was the longest weekend of my life, because I had a ticket worth 30-some million dollars that I had to worry about for four or five days,” Lloyd said with a nervous laugh.

The November 19th jackpot was $59.9-million dollar annuity, but Lloyd went with the cash option that grosses him $37.6-million dollars before taxes.  He may not be a regular Lottery player, but Lloyd is now the 14th Pennsylvanians to win a Powerball jackpot.  He wants to use his newfound wealth to “pay it forward.”

If you actually wanted to give your “true love” all of the items in the holiday classic song “The 12 Days of Christmas”, it would cost you 3.5% more this year.

Maids a milking, ladies dancing and lords a leaping saw no increase.  French hens held even.  Gold rings were down .8%.

Jim Dunigan, managing executive of investments for PNC Wealth Management, says the total cost of the items in the song has topped the 100 thousand dollar mark for the first time. Shopping for on line deals won’t help with this list; the total internet price is over 174 thousand, thanks mostly to shipping.

Dunigan says there is a correlation with the real consumer price index, and the Christmas Price Index can be used as an educational tool.  At pncchristmaspriceindex.com, there are interactive tools for educators to use to engage middle and high school students at this time of year in lessons about economic trends.

Dunigan says the slow recovery is showing up in this index as well. He says weak demand is keeping prices down, which is why they saw only a moderate increase. Wages were flat in the index and he says we see that in the economy as well with wages up overall by just 1.6%.

It’s the 28th year for the PNC holiday season index.