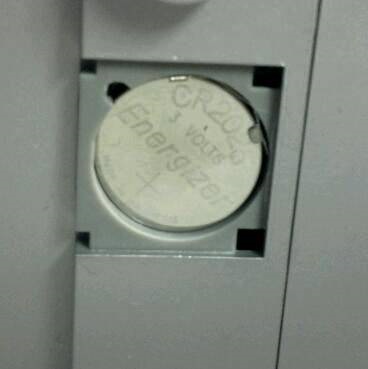 Child advocates are warning anyone who spends time around kids to be careful with button batteries.  Nearly three thousand children went to the emergency room after swallowing a coin-sized button battery last year.

Kate Carr, CEO of Safe Kids Worldwide, says the small lithium batteries are becoming an emerging danger as they show up in everything from key fobs to remote controls and decorations. She says the batteries can become lodged in the esophagus, where it’s triggered by saliva and causes burns.

Carr says the child is not choking, so you may not know they’ve swallowed a battery until the damage has been done.  The symptoms look a lot like the cold or flu.

Carr says the small shiny batteries can be especially dangerous for children under age 4. She says   children’s toys must have screws securing the battery compartment, but that’s not the case with many products that use button batteries, such as remote control devices and decorations.

Carr says if you think your child may have swallowed a button battery– seek immediate help.   You can learn more at safekids.org.  There’s also a national battery ingestion hotline at 202-625-3333.

On this week’s Radio PA Roundtable, coverage of the U.S. Attorney General in Philadelphia, a Pennsylvania Congressman holding a natural gas field hearing in Williamsport; and a warning to parents and doctors from the CDC which says the HPV vaccine is being under-utilized.

Drivers are taking another hit in the wallet with a jump in gas prices this month.

Nationally, gas prices are up 12 cents in just a week. AAA blames the sticker shock on higher crude prices- which have risen 17 percent in four weeks.  In Pennsylvania, the average price of gas has risen 15 cents a gallon since a month ago.

Jenny Robinson of AAA Mid Atlantic says global events like the unrest in Egypt and some production disruptions in Libya, Iraq and Nigeria are factors, but there are issues at home as well.  She says there are a number of refineries that are undergoing maintenance and repairs.  At the same time, we’re in the middle of peak summer vacation season, boosting demand.

Robinson   says experts believe prices could creep up at least a few more cents before the end of summer.  Any hurricanes could add to the pump price.

On this week’s Radio PA Roundtable, state House lawmakers were back in session this week. What could possibly interrupt their summer vacation? Also, we hear from Pennsylvania’s First Lady and talk to NASA on this special anniversary weekend.

The multi-state Mega Millions lottery game is following in the steps of Powerball and shaking up the formula a bit.  The changes take effect this fall.

The redesign of Mega Millions will mean a bigger starting jackpot and better overall odds of winning a prize. Pennsylvania Lottery Director Todd Rucci says there’s no change in the price, it will remain one dollar.

Players will choose the first five numbers from a bigger pool of 75 numbers compared to the current 56. The Mega Ball pool will shrink from 46 to 15 numbers. The overall odds of winning any prize will improve, but the odds of winning the jackpot will increase.

The changes take effect October 22nd. After the July 23rd drawing, advance play draws will decrease until the last drawing under the game’s current design.

Rucci says the changes are expected to produce three times as many winners overall, while producing bigger jackpots more often.

After changes were made in Powerball in early 2011, Rucci says they saw a great increase in sales.  They hope for the same results with the Mega Millions changes.

The official 150th Anniversary Commemoration of the Battle of Gettysburg ran from June 28th through July 7th. Organizers were planning for 200,000 visitors over that 10 day period.

That’s the number released by the groups who planned the massive event. The number was based on input from a variety of sources, including event attendance, hotel occupancy and reports from other attractions, tours and organizations.

The epic event commemorated three bloody days in July of 1863 when the armies of the Blue and the Gray met on the fields and hills in and around the tiny Adams County town. About 400 events were planned as part of the 10-day commemoration, including two large-scale battle re-enactments. On July 3rd, organizers say 35-to-40 thousand people particpated in the Pickett’s Charge Commemorative March.

In the actual battle on July 1st, 2nd and 3rd, 1863, more than 50,000 men were listed as killed, wounded or missing. The traumatic event changed the face and soul of Gettysburg forever.

Additional events are planned throughout this sesquicentennial year, including the recognition of the 150th anniversary of the Gettysburg Address in November.

The state house has come back for a one day voting session to deal with a bill that’s part of the state budget package.

The vote was 103 to 85 to concur with changes made to the fiscal code in the senate, after some brief comments about whether the session itself was evidence of a late budget.  The senate had stripped out language that the house added related to payday lending, then adjourned for the summer.

The state house will take a break from its summer break to return to voting session on Monday.  A piece of the budget package needs to be finalized.

The House passed the fiscal code on July 1st, after adding an amendment regarding payday lending.   The language indicated that the Senate and House majority leadership intended to pass legislation establishing a new schedule of rates and charges by October 31st.

The house adjourned until September, with only a non-voting day on the  schedule for July 8th to sign bills and finish up other business.   But on July 3rd, the Senate stripped out the payday lending language and sent the fiscal code bill back to the house. On the same day, the senate reluctantly approved the public welfare code, as amended by the house. Language on Medicaid expansion added by the senate had been stripped out by the house.

The state budget secretary warned that lack of final action on the fiscal code could have negative effects on state government. Governor Tom  Corbett asked legislative leaders to pass it as soon as possible.  The code includes language authorizing the spending of hundreds of millions of dollars, including some funding for higher education and additional money to help Philadelphia’s struggling public schools.

After house leadership looked at whether final action could wait until September,   Speaker Sam Smith called the house back for a voting session at 1 pm on July 15th.

The delay in final passage of the fiscal code has led some to debate whether the budget for this fiscal year was really on time. The Governor did sign the General Fund budget before the start of the new fiscal year.

Franklin and Marshall College Political science professor Terry Madonna sees the dispute between the State House and Senate over the fiscal code a sign of serious distress between the two chambers.   There were also big differences between the house and senate over key items in Governor  Corbett’s agenda; liquor privatization and transportation funding. Neither won final approval before lawmakers took their summer breaks.

On this week’s Radio PA Roundtable, more from Governor Tom Corbett on his resistence to a Medicaid expansion in Pennsylvania. Also, Congressman Lou Barletta is continuing his fight against illegal immigration in Washington; and it will cost more to send your kid to one of the state-owned universities in the coming year.