On this week’s Radio PA Roundtable, a House subcommittee opens a hearing on the possible impeachment of state Attorney General Kathleen Kane; legislative budget hearings get off to a contentious start in Harrisburg; and new poll numbers on how you think Harrisburg is doing. 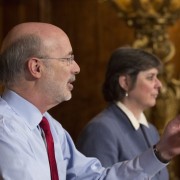 Governor Tom Wolf announced Wednesday that he has been diagnosed with a treatable form of prostate cancer. First Lady Frances Wolf joined the governor during a 10-minute morning press conference.

Governor Wolf says his treatment will begin in the coming weeks and aside from taking a few days off at the onset, he’s planning to continue working and he says the medical condition will not hinder his abilities as governor. He hopes the public discussion of the condition will remind people of the importance of regular medical checkups.

Click the audio player below to hear the full press conference:

This blog post is taken from commentary in this weekend’s edition of Radio Pennsylvania Roundtable, hosted by Brad Christman. You can listen to the entire show, which includes Kathleen Kane’s statement here on PAMatters.com.

The great tragedy of this whole situation (the Kathleen Kane saga) may be that Kane had a chance to be the crusading power of justice she envisions in her own mind. The porn email scandal that has rocked Harrisburg – and was uncovered by her initial investigation of the handling of the Sandusky probe – could have been a shining moment for her, because…like Kathleen Kane or not…she is right about those who were involved in the inappropriate email chains. But her crusading effort is overshadowed and tainted by Kane’s use of the emails as a weapon in her own personal political agenda and legal battles. All along, the emails were used as a “chip” she would threaten to throw into the pot as her personal legal situation got murkier and murkier. As a result, any cries of justice in her efforts were overwhelmingly drowned out by the noise of a politician using her office as an arsenal for her own personal battles.

Kathleen Kane is not running again, and she seems to be the last person on the planet to have realized that. Her announcement this week fell on mostly indifferent ears even within her own party, as Democratic candidates and strategists noted that it was determined long ago that Kane was a non-factor in the coming election – whether she was a candidate or not.

Brad Christman is the News Director of the Radio PA Network, based in Harrisburg, and is the host of the network’s flagship program Radio Pennsylvania Roundtable. He has covered Harrisburg for the past 22 years.

On this week’s Radio PA Roundtable, Attorney General Kathleen Kane makes an announcement that surprises no one; the state’s Auditor General releases a report on the PA Gaming Control Board; and questions about the use of meteorologists by state agencies. 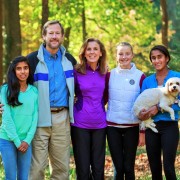 Radio PA & PAMatters.com present the second in our series of candidate profiles in the race for the Democratic nomination for U.S. Senate in Pennsylvania. Today we profile former Pennsylvania DEP Secretary Katie McGinty.

Previously, we presented an interview with former Congressman and Navy Admiral Joe Sestak. You can also listen to that interview in its entirety here on PAMatters.com. 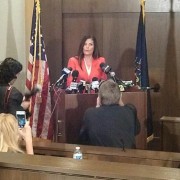 Embattled Pennsylvania Attorney General Kathleen Kane announced Tuesday that she will not be seeking re-election in 2016. Kane cites family concerns, rather than the serious criminal charges she faces, the suspension of her law license and the efforts by state lawmakers to remove her from office.

Today was the deadline for candidates to submit their petitions to be eligible for the primary ballot.

On this week’s Radio PA Roundtable, we recap two big events this week: 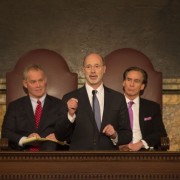 Governor Tom Wolf addressed a joint session of the state legislature on Tuesday, February 9th, 2016 to deliver his second budget address to members of the General Assembly.

Click the audio player below to hear the full speech:

On this week’s Radio PA Roundtable, Pennsylvania health officials talk about the Zika virus; Governor Tom Wolf answers listener questions; and the groundhog says we can expect an early spring.