The details of the plan may be new, but the arguments for and against liquor privatization are perennially similar.  “This is an agency that makes money, that continues to make more money every year,” UFCW Local 1776 President Wendell Young IV said while questioning the logic behind dismantling the state store system.

The UFCW, which represents 3,500 employees at Pennsylvania’s wine & spirits shops, has been on the front lines of the privatization battle for years.  This time around, Young says the governor’s plan would not only jeopardize thousands of family-sustaining jobs, but it would drastically increase the number of alcohol outlets.  “If you think about what he proposed… you could wind up with 20 – 30,000 or more outlets in Pennsylvania selling wine or spirits.”

As Senator Jim Ferlo (D-Allegheny) did on the Senate floor, Wednesday, Young likens the Corbett plan to the “Wild West” of alcohol sales.

The expansion of alcohol outlets has some worried about the effects of increased consumption.  “There is a large body of research that shows a relationship between increases in consumption and a whole host of alcohol-related problems,” says Deb Beck, President of the Drug & Alcohol Service Providers Organization of Pennsylvania.  “I don’t think one needs a lot of research to get that.”

Beck says a little inconvenience is a small price to pay, noting that Pennsylvania already has unmet needs when it comes to drug & alcohol treatment programs.

While it may not be enough to assuage the concerns of privatization critics, Governor Tom Corbett’s plan would address both issues: employees and increased outlets.

The plan calls for tax credits for business that employ displaced Liquor Control Board employees, education and civil service credits, as well as a new committee to help affected workers find re-employment.

As for the increased number of alcohol retailers, the governor’s plan tries to balance it with increased enforcement measures.  They include stiffer penalties for selling booze to underage or visibly drunk persons, a requirement that new alcohol retailers must use ID scanners and a 75% increase in funding for treatment programs.

If Corbett succeeds it would leave Utah as the only state to maintain complete control over its liquor system – from distribution to retail.

Natural gas customers have had their choice of suppliers for about 14 years, but  many don’t make a switch.  Now, the Pennsylvania Public Utility Commission   is offering them a new tool to comparison shop.

When the PUC upgraded its web site recently, it created PAGasSwitch.  While pricing information has been available for some time on the Office of Consumer Advocate’s website, this tool is very much like PAPowerSwitch , in that it allows interactive comparisons. It allows customers to see prices, services and incentives from natural gas suppliers.

Denise McCracken of the PUC says only about 12% of natural gas customers have switched recently and they’re hoping the new tool will encourage more of them to “shop” for a natural gas supplier, just like consumers shop for an electricity supplier. 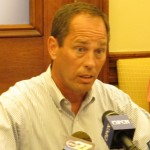