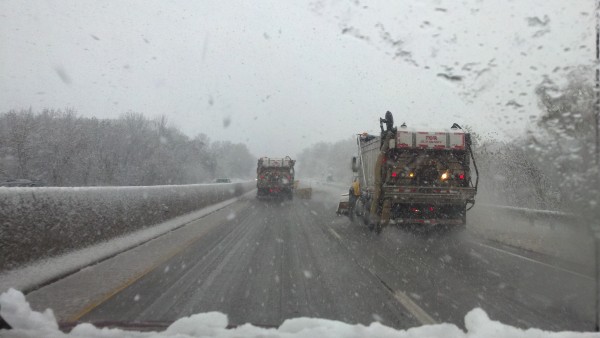 A winter storm warning covers the eastern two-thirds of Pennsylvania. The early season coastal snow storm could bring 4 to 8 inches or even more to some areas before ending Saturday night.

Meteorologist Bill Gartner of the National Weather Service in State College says the risk of power outages is increased because the leaves are still on many trees, and the added weight of the snow could cause limbs to break off and fall on power lines. Thousands of power outages were reported by utilities in the affected areas.

After the storm, temperatures will moderate, so it shouldn’t stick around long. But it could be one for the record books. Looking back at early season snows, State College recorded 4.7″   on October 15th, 2009.  You have to go back to 1925 to find the early season snowfall records for south central Pennsylvania.  A storm on October 30th, 1925 brought 5.4” of snow to Chambersburg, 2” to York, and 2.1” to Harrisburg.

PennDOT had already made its winter preparations before the snow was in the forecast.   Spokesman Steve Chizmar says they’ve already plowed once this season, about a week ago in Centre County.  He says they actually start preparing for the next winter as they wrap up the previous one. Last winter, they used about one million tons of salt and they already have over 600 tons stockpiled and more will be delivered through the season.

There will be a new snow removal method in parts of the state.  Chizmar says they’ve tested tow plows in the last two years and they’ll be deploying about 10 of them this year. He says it’s like a giant plow that’s pulled behind a vehicle. He says when the plow is engaged; it swings out and plows snow in the lane next to the truck.  He says they’re basically accomplishing the work of two plows with one.

Chizmar hopes drivers are ready for winter weather.   He says when roads are slippery, people need to slow down, allow more distance between other vehicles and pay attention to the road. Motorists should check their tires for proper inflation and tread, make sure heaters and defrosters and windshield wipers are working properly and all belts, hoses,  the battery and brakes are in good working order.

Chizmar says don’t forget to clear snow and ice from the vehicle before you drive.  It’s not only a safety measure; it’s the law in Pennsylvania. If ice or snow falls from your vehicle and  injures someone, you can be fined.

Motorists can check 511PA for road conditions before they go out on the highways.