On this week’s Radio PA Roundtable, Brad Christman and Matt Paul discuss the latest Voter ID developments as a Commonwealth Court hearing wrapped this week; you’ll also get a wrap-up of another busy week at Penn State University as attentions shift to on-the-field concerns in the football program; and an update on the efforts to privatize PA Lottery management. You can also play along with Brad and Matt as they offer a quiz on the new AP NFL power poll. Where did your Eagles and Steelers rank?

Opponents of Pennsylvania’s new Voter ID law are asking the Commonwealth Court to block enforcement before the November election.  “Article 1, section 5 of Pennsylvania’s constitution guarantees that elections shall be free and equal,” says Marian Schneider of the Advancement Project.

The petitioners contend that one million Pennsylvanians are eligible to vote but lack the photo ID required under Pennsylvania’s new law.  “If you’ve listed to the proponents of the law… you would have the impression that everyone either has photo ID or they can easily get it.  Their message is that photo ID is used for everything, what’s the big deal,” says attorney David Gersch.  “It is a big deal.”

The hearing before Commonwealth Court Judge Robert Simpson starts Wednesday morning, and is expected to continue through most of next week.

Despite critics’ complaints, state officials are standing by the new law.  “Really for this size issue in Pennsylvania, I think the challenges we’re facing are relatively small,” Secretary of the Commonwealth Carol Aichele told reporters in Gettysburg last week.  She was responding to questions about the more than 750,000 registered voters that aren’t already in the PennDOT database.

Letters are going out to every one of them, reminding them of the new law and the complete list of acceptable IDs.  The Department of State has also announced the creation of a new card that can be issued to voters who need identification under the law, and who are unable to provide all the documents they would normally need to obtain a PennDOT ID.

But it’s not enough to assuage the hundreds of protesters who gathered on the state capitol steps Tuesday. Their rally cry: “Voter ID, Not for Me.”  Among the speakers was Sen. Daylin Leach, who says that even the Commonwealth’s lawyers agree there’s no evidence of in-person voter fraud.

“This bill was passed under false pretenses.  That’s why I’ve introduced a bill to repeal the Voter ID bill,” Leach announced to a round of applause at Tuesday’s rally.  Additional rallies are planned in Pittsburgh, Allentown and Philly on Wednesday. 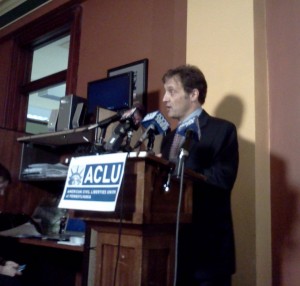 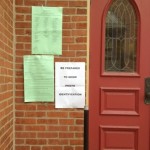 Tuesday was billed as a trial run for Pennsylvania’s new Voter ID law.  Photo identification was supposed to be requested – not required – at the polling place.  While the ACLU of Pennsylvania was not actively looking for problems, legislative director Andy Hoover did notice several signs suggesting photo ID was required.  “It led to confusion,” Hoover says.  “Despite what the Secretary of State has said it was not smooth, and that was just from the few polling places that we saw.”

Hoover’s referring to a statement released by the Department of State on Tuesday afternoon.  It reads that Secretary of the Commonwealth Carol Aichele visited several polling places in Philadelphia and witnessed the process working well.

“There may have been one or two of those bumps but overall – from what we heard from throughout the state – it went very smoothly,” says DOS spokesman Ron Ruman.  He says the department will train poll workers on the new law’s requirements throughout the summer, and reach out to educate voters all the way up to the November 6th general election.

Ruman also confirmed reports that a few voters refused to show photo ID as an act of protest.  “Folks are certainly entitled to their opinion.  This is America and that’s what makes it a great country, but we don’t feel that the right thing to do is to encourage people to refuse to show their ID.”

While the Department of state believes that 99% of eligible voters already have an acceptable form of photo ID, Ruman hopes that even the law’s critics will assist the rest in obtaining one by the fall.

Likewise, Andy Hoover is not encouraging anyone to refuse to show photo identification in November.  He’d rather folks support their pending litigation in hopes of striking down the law, which the ACLU believes disenfranchises voters.

Earlier this year Pennsylvania became the 16th state to enact a Voter ID law.  The goal is to preserve the integrity of every vote. 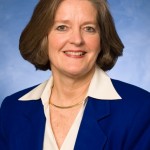 Governor Tom Corbett last evening signed legislation that will require all voters to produce a photo ID starting with the November general election. The governor signed the bill the same day it received final legislative approval following three days of emotional floor debate in the state House of Representatives.

The new law takes effect immediately and will be rolled out on a test basis for the primary election on April 24th. Come November, however, the ID requirement will be in place on a permanent basis. Supporters say the effort will help crack down on voter fraud, but critics say it’s a solution for a non-existent problem that will disenfranchise many voters, especially the poor and the elderly.

Acceptable forms of ID at the polling place will include a driver’s license, a student ID issued by a Pennsylvania college or university or an ID from a Pennsylvania care facility.

Opponents are vowing to challenge the new law in court.

As part of the law, PennDOT will issue free photo IDs to anyone in need of such identification for voting, but applicants would need to supply the department with proper documents, such as a birth certificate. That service is already available today according to Governor Corbett. A public information campaign is also getting underway.