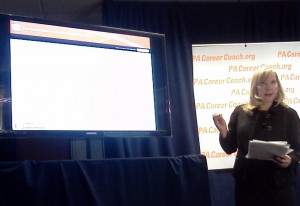 Guidelines are being drafted for a new program called Keystone Works, which could help unemployed Pennsylvanians find a job more quickly.  “Keystone Works will provide an opportunity for the unemployed worker to receive training with a business while continuing to receive their UC benefits, at the same time incentivizing the employers to hopefully hire these unemployed individuals,” says Michelle Staton, deputy secretary for workforce development with the state Department of Labor & Industry.

The worker benefits by staying connected to the workforce, obtaining new skills and receiving job-specific training in a high-priority occupation.  Even if they are not hired at the end of the eight-week program, Staton tells us the new skills will make it easier to find work elsewhere.

The employer benefits because the program helps off-set the cost of training, and offers incentives of up to $1,500 for every trainee they hire.

The new state budget includes $2.5-million dollars to cover the cost of those incentives.  Staton says their goal is to train 2,000 workers in the first year of “Keystone Works.”  The Department of Labor and Industry will be developing a website specifically for individuals and companies interested in Keystone Works.

The statewide jobless rate currently stands at 7.5%.  July’s numbers are expected to be released later this week.

A new company is administering Pennsylvania’s unemployment insurance debit cards, and new terms of service are in place.  According to Department of Labor & Industry spokesman Sean Yeakle, the new agreement offers more free withdrawals and more ATM locations.  “More than 430,000 Pennsylvanians receive unemployment compensation through a debit card, and under the terms of service governing this new program we estimate they’re going to safe about $3.5-million dollars in fees.”

“That’s money that will go back into the economy and serve struggling Pennsylvanians and their families,” Treasurer Rob McCord said in a statement.  The Department of Labor & Industry and Treasury Department had been working together to reduce fees – many of which are uncommon to traditional debit card users – under the new agreement with ACS.

Under the new service terms, Wells-Fargo ATMs will now be considered out-of network.  PNC Bank and MoneyPass ATMs will be considered in-network.  Gone is the “denial fee,” which had been applied if an attempted withdrawal exceeded available funds.  However, out-of-network ATM transactions will see fees increase from $1.50 to $1.75.  Impacted Pennsylvanians can learn more online.

Pennsylvania’s unemployment compensation system started going “paperless” in 2007.  Today, all payments are made electronically.  “That’s definitely saving Pennsylvania taxpayers money in terms of the millions of dollars associated with printing and mailing the checks, and it’s also reduces the opportunity for fraud,” Yeakle says.