“We have constrained revenue growth,” Zogby explained.  “We’re seeing less revenue growth coming out of this great recession than we’ve seen in any recovery in recent time.”

The governor’s new budget is built on estimated revenue growth of 3.8% next year.  “While some may regard it as optimistic, it’s certainly trending below what have been historical trends,” says Zogby, who points out that a robust recovery is usually accompanied by 6 or 6.5% revenue growth.

While the budget secretary was reminding the panel about this ‘new normal,’ Democrats were reminding him that there are real people behind every one of the line items.  “You’re cutting the budget at the state level,” State Senator Jim Ferlo (D-Allegheny) said.  “You’ve fulfilled your ideological, dogmatic role that you’ve been elected to serve.  But what is the impact, what is the analysis of what those cuts mean back at the local level?”

Keeping government costs under control will allow the private sector to create jobs, according to Governor Tom Corbett, who’s been making a series of stops at Pennsylvania companies to tout his budget plan.  “Government doesn’t grow the economy, the private sector grows the economy,” Corbett said during Monday’s stop at a York County manufacturing plant. 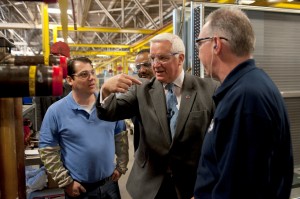