As state lawmakers enter the 2013 budget cycle, the head of Pennsylvania’s United Way wants an independent review of a 2011 law that paved the way for $400-million dollars in savings at the Department of Public Welfare.  United Way of Pennsylvania President Tony Ross says Act 22 gave the DPW secretary unprecedented authority to implement new regulations in order to achieve the savings.  “We think it’s very important for policymakers and others to have information about what those cost containment measures meant – in terms of waste, fraud & abuse, and also impact on vital services,” Ross says.

Ross tells Radio PA there’s anecdotal evidence on both fronts, but an independent review can get to the bottom of it.  “We don’t particularly have a preference,” he says of whether it comes from the Auditor General, Independent Fiscal Office or the Legislative Budget & Finance Committee.

DPW spokeswoman Donna Morgan says a lot went into the attainment of the $400-million in savings, not just Act 22.  She points out that no legal challenges have been filed since the law passed the General Assembly and was signed by the governor.  “It’s not about just cutting here and cutting there,” Morgan explains.  “It’s about making these programs more efficient, breaking down the barriers between different programs and providing more flexibility so that tax dollars can be used more efficiently.”

Welfare spending accounts for over 38% of the current General Fund budget, and mandatory medical assistance costs alone are expected to increase by $650-million dollars in the new fiscal year, according to the Mid-Year-Budget Briefing.

On this week’s Radio PA Roundtable, Matt Paul breaks down the sweeping recommendations of Pennsylvania’s Task Force on Child Protection. He’ll also be jointed by Radio PA Sports Director Rick Becker to look back at an unprecedented season of Penn State football, and learn how budget cuts are affecting the state’s nonprofit sector.

Nearly 70% of the 800-nonprofit groups responding to the United Way of Pennsylvania’s budget survey report feeling the effects of state budget cuts in 2012, and some indicate the cuts have been going on for five years or more.  Nearly half of the groups also report feeling the pinch from federal budget streams.

At the same time, more than three in four of the human services agencies responding to the survey say the economic downturn has increased the demand for their services.

“Over a third of the responding organizations (35%) reported turning away individuals needing service, while another 21% revoked services from individuals due to a lack of funding,” explained United Way of Pennsylvania President Tony Ross.

United Way of Lackawanna and Wayne Counties President Gary Drapek tells Radio PA the crisis extends beyond the human services agencies to the people they serve, and Butler County United Way Executive Director Leslie Osche is especially concerned about a group she calls the ‘invisible middle.’

“It’s the struggling young people and the struggling families that tend to get lost in the shuffle, and become somewhat invisible in this process, because they’re not necessarily those who are in nursing home care or in institutional care of some sort,” Osche explains.

Tony Ross recognizes that state policymakers may not be able to increase funding in these tough times, but he’s still urging them to stop the cuts to human services.  Another recommendation is to implement performance-based budgeting that funds the programs that work.

“In the long run we will be wasting more money because more services will be needed if we don’t start funding the preventative services to the level that we should,” Drapek says.

State budget pressures have taken their toll on the Homeowners’ Emergency Mortgage Assistance Program (HEMAP).  The program, which provides small loans to financially distressed homeowners on the brink of foreclosure, has not accepted any new applications since last September.

State lawmakers now believe they’ve found a solution, and the Senate has voted unanimously to tap the recent national mortgage abuse settlement for HEMAP funding.  Pennsylvania will be receiving about $65-million dollars specifically for consumer protection purposes.  Senator John Gordner’s bill (SB 1433) would direct 90% of that money into the HEMAP program.  The remaining 10% would be split evenly between the attorney general’s office and legal services for consumers.

“Since 1983, we have saved 46,000 homes through our HEMAP program,” Gordner explained from the Senate floor prior to Wednesday’s vote.

United Way of Pennsylvania President Tony Ross tells Radio PA that HEMAP is one of the wisest investments the state can make, “Because we know that homelessness is a major cost driver in terms of social services.”  Ross points to a recent study that found hundreds of millions of dollars in savings.

If it becomes law, the bill is expected fund HEMAP for the next five years.  It’s now headed across the capitol where it will await consideration by the state House. 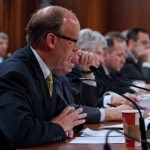 The State House has already advanced a $27.3-billion dollar budget bill, despite Democrats’ objections.  In fact all House Democrats voted against a budget that Minority Human Services chairman Mark Cohen (D-Philadelphia) calls “cruel and draconian” in many ways.  “We believe that as the Republicans in the Senate get to know this budget better… there’s going to be a role for us in the negotiations,” Cohen said as he convened a hearing of the House Democratic Policy Committee on Thursday.

The hearing probed the proposed state budget’s impact on human services.  United Way of Pennsylvania President & CEO Tony Ross has a mixed reaction to the House GOP budget bill.  “We want to thank the House for restoring some funding for the Human Services Development Fund, and also we want to encourage lawmakers not to cut what works,” Ross says.  He tells us that investments in human services keep people healthy and reduce long-term costs to taxpayers.

The $23.5-million dollar Human Services Development Fund (HSDF) was zeroed out of Governor Tom Corbett’s March budget proposal.  The House GOP budget bill restored $19.9-million of those dollars.  Ross says the HSDF is the only flexible source of funding that counties have to address human services needs.  “What’s so wonderful about it is that it allows each county to determine where their need is greatest.”

Among Ross’s biggest budget concerns is the Homeowners Emergency Mortgage Assistance Program (HEMAP).  It too was zeroed out of the governor’s initial budget proposal, and House Republicans have restored about 75% of its funding.  Ross says the Federal Reserve has actually cited Pennsylvania’s program as more effective than the federal program for assisting citizens facing foreclosure.

As the budget bill heads to the Senate, Ross says the United Way and others will continue their advocacy efforts.  “We hope that perhaps with the better than expected revenues… we can use some of that to restore and mitigate some of these cuts.”  Behavioral health services, rape crisis centers and domestic violence shelters are all facing 10% budget cuts under HB 1485.