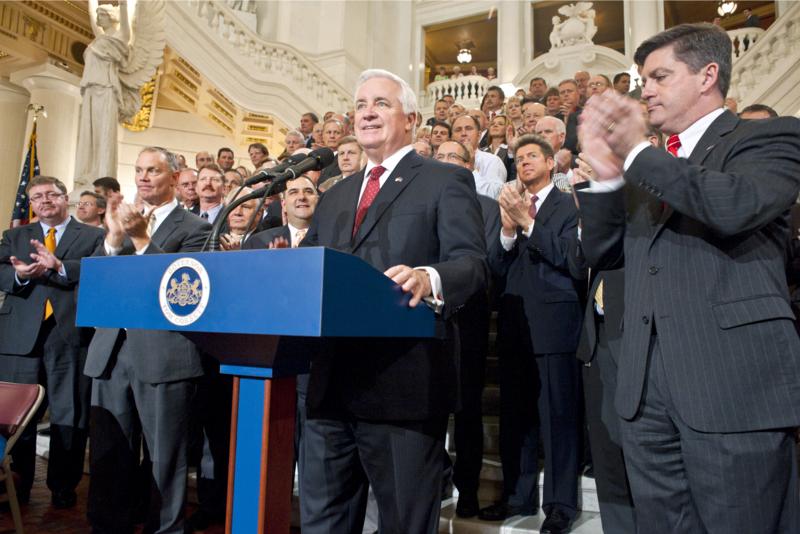 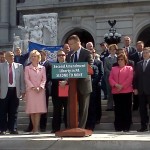 State Rep. Scott Perry Addresses a May Gun Rights Rally at the Capitol

Law abiding gun owners’ rights to self defense just got stronger in Pennsylvania.  Governor Tom Corbett signed the expanded “Castle Doctrine” privately on Tuesday.  “It codifies existing law… it codifies the self defense law under common law,” Corbett said in response to questions at an unrelated news conference.

“If you believe that your home is your castle as I do… then you also believe you have the right to defend it,” said State Rep. Scott Perry (R-York) at a capitol gun rights rally in May.  Perry is the bill’s prime sponsor.

The expanded Castle Doctrine eliminates one’s “duty to retreat” before using deadly force if they are under attack, virtually anywhere they are legally allowed to be.  Currently, a gun owner’s right to stand their ground ends at their front door.  The new law takes effect in 60-days.

CeaseFire PA had recently delivered more than 4,000 petitions to Governor Corbett – urging him to veto the expanded Castle Doctrine.  “This expansion we think is a dangerous and unnecessary change to that law, which means that now you can use deadly force in public spaces even if you could have walked away safely,” says CeaseFire PA’s executive director Max Nacheman.

The news conference, referenced earlier, was held as Governor Tom Corbett publicly signed the “Fair Share Act” into law Tuesday.  It is designed to ensure that defendants in civil lawsuits are only responsible to pay their fair share.  Under the previous system of joint & several liability, defendants with as little as 1% of the fault could be on the hook for 100% of the damages.