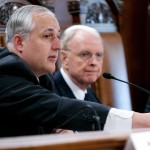 The new fiscal year begins on Friday, but Pennsylvania may still have its first on-time budget in eight years.  The State Senate voted along party lines (30 to 20) to pass a GOP-backed $27.15-billion dollar spending plan Tuesday evening.   “This year marks a return to a state budget paid for with state revenues,” says Senate Republican Leader Dominic Pileggi (R-Delaware), referring to the $7-billion dollars in federal stimulus money Pennsylvania received over the past three years.  “It is difficult but necessary to reset state spending to reflect that new reality.”

Senate Democrats still say the budget pain doesn’t have to be so severe. “We’re sitting on an extra, what will probably be by June 30th, an extra $700-million dollars in budget surplus,” says Democratic Appropriations Chair Vincent Hughes (D-Philadelphia).

But that’s a “so-called” surplus, according to Governor Tom Corbett.  “Yes more revenue has come in, but we still have a deficit… We have spending that has to be done in the future, we don’t think that next year is going to be much rosier – if at all – than this year,” Corbett told reporters on Tuesday.

While Corbett says spending matches revenues in the current budget bill, he knows that it’s not a done deal yet.  “Until there is a budget, until I have an opportunity to sign one, there is no budget,” he says.  The budget bill now awaits House action.