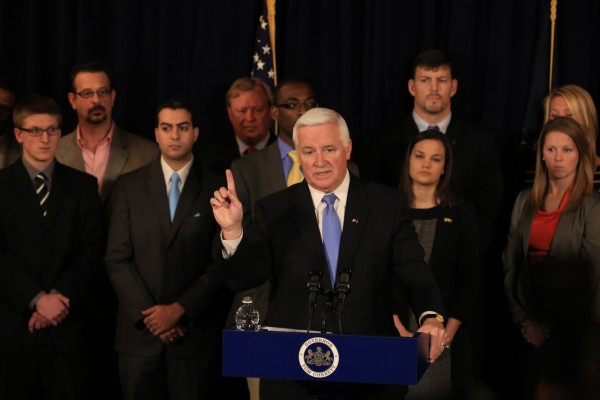 Responding to a listener question on Radio PA’s Ask the Governor program, Tom Corbett expressed confidence that he will win the antitrust lawsuit he filed against the NCAA earlier this month.  Governor Corbett is asking the federal courts to throw out the NCAA sanctions imposed on Penn State in the wake of the Jerry Sandusky scandal.

“The NCAA didn’t even follow their own rules.  It seems to me they’re accusing Penn State of not following guidelines.  There are no rules under which they were ever charged.”

The sanctions included in the NCAA’s consent decree with Penn State are: a four-year postseason ban, a loss of scholarships, five years of probation, the vacation of all wins from 1998 – 2011 and a $60-million dollar fine.

Even if the sanctions are thrown out, Corbett says Penn State should honor the $60-million dollar fine.  However, he believes that 100% of the money should stay within Pennsylvania borders to benefit programs that prevent child sex abuse and assist its victims.  Under the consent decree, only 25% is guaranteed to stay in-state.

The NCAA has 60-days from the date of the lawsuit to file its response.  The Commonwealth will then have 30-days to respond to the motions being made, so any action on the suit is still months away.

Governor Tom Wolf on his Nominee for State Police Commissioner