The state house Education Committee is considering a bill to add child exploitation to the health curriculum in Pennsylvania schools.  The committee held a hearing on HB 2318.

The sponsor of the bill, Representative Mauree Gingrich (R-Leb) says over 90% of abusers are well known to the child.  She says the bill would help educate children about the risks and how to recognize dangerous situations and the warning signs of grooming.

Gingrich says the best defense we can provide our children is knowledge. She adds that awareness is a powerful tool in the fight against child sexual abuse and exploitation.  She says the Department of Education would develop age appropriate curriculum for grades K through 8.

The measure has bipartisan support.  Representative James Roebuck, minority chair of the education committee, says the bill is the next logical step after efforts to strengthen background checks and increase reporting requirements.   He says it’s an effort that transcends party and political differences.  He says our young children are our future and it’s the responsibility of elected officials to help protect them.

Former University of Pittsburgh and Philadelphia Eagle linebacker Al Chesley spoke in favor of the bill.  He says he was sexually abused by a policeman, who was a neighbor, when he was 13 years old.  He says when you arm kids with education, they begin to be empowered.

Erin Merryn of Illinois would like to see all fifty states pass such a bill. She says four states have already acted. A survivor of child sexual abuse, Merryn says we have to empower kids to tell, tell, tell. 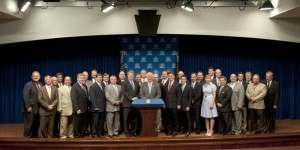 The “Capitol to Capitol – ONE Ride” took 30-bicyclists and more than a dozen volunteers from the Pennsylvania Capitol in Harrisburg to the US Capitol in Washington DC this week.  “Yesterday my legs were pretty sore,” Kim Razzano said of the 155-mile trek.  But the president of the Pennsylvania State Association of Health, Physical Education, Recreation and Dance (PSAHPERD) expects to be back on her bike this weekend.

PSAHPERD has been planning the ride for a year now, all to raise awareness of the childhood obesity issue and to promote healthy living among our youth.  Razzano wants policymakers to understand the need for quality health and physical education programs in schools.  “Kids do not have the ammunition needed to fight our society’s way of living, which is really promoting obesity,” she explained in an interview with Radio PA.

Mother Nature kept the skies dry and the humidity down for the three-day ONE ride, which refers to PSAHPERD’s 2012 theme: “All for One – That’s how we roll.”  Razzano says the best part of the ride was the camaraderie of the riders & volunteers, and their arrival as ONE in Washington DC.

While the ride may be over, the group is still raising money.  “We’re trying to raise $10,000 to donate to the Pennsylvania affiliate of the American Heart Association, which will be earmarked for educational programs that combat childhood obesity and promote lifelong wellness.”  Razzano thinks that small amount of money can make a big impact for a first-year ride.

The Centers for Disease Control and Prevention reports that 17% of all children and adolescent are overweight in the United States.

Dozens of schools in Pennsylvania are still under scrutiny after an examination of standardized test scores raised questions. The state Education Secretary was asked about the situation during a budget hearing in the house appropriations committee  this week.

Ron Tomalis said that 51 schools in Philadelphia and schools in 21 other districts, including 4 charter schools, are still under review. He says the department will be making sure teachers in those schools do not proctor their own classes when the exams are given this year. In some schools, the state will have monitors present during the exams.

Tomalis told the house appropriations committee they’ve identified schools where the pattern does not appear to be isolated. He says in those schools,  the questions were building wide across a couple of subjects and a couple of grades. He says in other schools, there were patterns specific to just one or two proctors. He says it’s a shame they’re dealing with this situation.

More than 20 other districts have been cleared of wrongdoing.      The math and reading PSSA tests are scheduled to begin March 12th, with writing and science tests next month.

Governor Tom Corbett has unveiled his budget proposal for the 2012-13 fiscal year. The $27.1 billion spending plan comes in $10 million under the current year’s actual budget and represents what the governor calls a realistic budget in difficult times.

Prior to the Governor’s speech to a joint session of the General Assembly, state Budget Secretary Charles Zogby reported that the projected revenue shortfall for the current fiscal year is up to $719 million, putting more pressure on the governor and lawmakers who will have to craft the next budget.

While basic education would see a slight increase in its General Fund subsidy, it would all but hold the line from last year’s overall number. The governor took the opportunity during his address to chastise political opponents, saying they misrepresented his education budget last year. The governor says he raised basic ed funding, but the evaporation of federal stimulus dollars results in an overall decrease in spending.

Governor Corbett is proposing more deep cuts to higher education, which last year was slashed by about 20%. This year, the 14 state-owned universities would see their state funding slashed by another 20% under the governor’s plan. Meanwhile, three of the four state-related universities – Penn State, PITT and Temple – would average 30% cuts. Lincoln University would receive the same funding level as last year. Governor Corbett also announced the formation of a special panel to examine the way higher education is funded in Pennsylvania. He has appointed former state Senator Rob Wonderling to head that committee and report back in November.

Next up in the state budget process: weeks of budget hearings in Harrisburg, then lawmakers will try to iron out a final spending plan that will be brought to the floors of the House and Senate by June 30th.