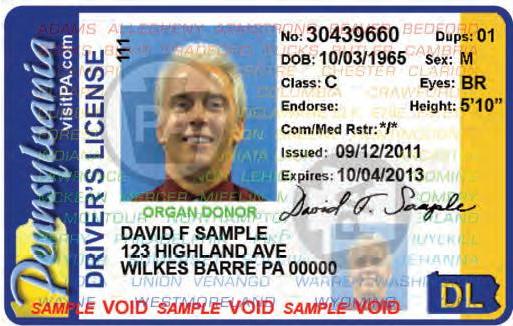 It’s going to be harder to “fake” a Pennsylvania driver’s license.   The Pennsylvania Department of Transportation has become the first in the nation to adopt a new security feature on the licenses it issues.

The new feature employs a hologram that appears to switch between white and black as the image is moved 90 degrees.  It’s a higher resolution and PennDOT believes it will make it easier for police officers and people in the bar industry and banking to spot a fake driver’s license or ID.

Deputy Secretary Kurt Myers says the quality of fake IDs has grown rapidly. He says PennDOT believes strongly its important to add to the security features of its licenses to stay one step ahead of those who are attempting to commit fraud.

Jan McKnight, of PennDOT’s Safety Administration, says the new licenses are being phased in starting today. That means everyone getting a new photo taken for a license will now get the new security feature. While the new licenses will be issued as old ones are replaced on the normal four year cycle, McKnight says people can complete an application for change, correction or replacement of a noncommercial driver’s license on line  and get one sooner.

2011 Report Looks at the State of Child Welfare