It was 1997 and a major event was unfolding in Philadelphia. General Colin Powell had brought together all living U.S. Presidents, with the exception of the ailing Ronald Reagan, for “The Presidents Summit for America’s Future.” It was the grand kickoff for his America’s Promise initiative. In addition to Presidents Ford, Carter, Bush41 and Clinton, Philadelphia was a virtual who’s who that week. I met movie stars, sports legends and even had a brief chat with Tony Robbins, which later resulted in his self-help cassette series being shipped to my office (not sure what he was implying with that).

Amid all the chaos of those 2 and a half days in Philadelphia, I met up with Arlen Specter near Independence Hall. President Clinton was about to speak to a gathering crowd and we were both seeking out some quiet time amidst a sea of people. At that time I had known Specter for several years, dating back to my days in local radio in Chambersburg and our many interviews together during his frequent stops at Letterkenny Army Depot and other Franklin County locales. My move to Radio Pennsylvania in 1994 allowed me to interact with the senator on an even more frequent basis and I think he had great regard for our network.

We were standing along a walkway back toward the Market Street section of Independence Mall and Senator Specter offered to be interviewed. He was standing just off to the side of the main foot traffic and I was facing him with my back to the sidewalk. We had been talking for about 5 minutes or so when I suddenly felt a hand in the middle of my back give me a not-so-gentle shove. Completely caught off guard, I stumbled into Senator Specter, who caught me just before we would have tumbled into some bushes. We both spun around just in time to see a group of very large men, formed in a circle, pushing through the crowd making sure not to stop for anything as inconvenient as other people. I stood on my toes to get a better look and I saw what they were so aggressively protecting. It was Oprah.

Yes, Arlen Specter and I had just been pushed aside, and rudely so I might add, by Oprah Winfrey’s entourage. I wish I had been thinking on my feet enough to fall to the ground writhing in perceived pain. Maybe I could have retired years ago.

Anyway, as I reflected on Arlen Specter’s life on the day of his death, that story brought a smile to my face. I have never shared that tale on the air or in writing before and I thought you might enjoy reading it.

Arlen Specter passed away yesterday at the age of 82.

[Brad Christman is the News Director of Radio Pennsylvania] 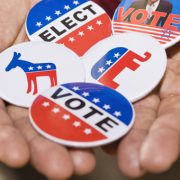