The Corbett administration’s third budget season may be its most difficult yet, according to Budget Secretary Charles Zogby.  The 2012-13 Mid-Year Budget Briefing projects the state will end the current fiscal year $85-million dollars in the black, but $1.3-billion in mandatory cost drivers await in the new fiscal year. 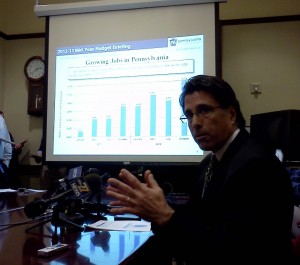 “We’re working very hard in a number of areas – education would be one, health & human services – to not have to make the level of deep cuts that we’ve made in the past,” Zogby told reporters huddled in a capitol conference room.

Zogby’s not divulging many details ahead of Governor Tom Corbett’s February budget address, but says it will not include any new taxes.

For now, the budget planning revolves around a hypothetical 3% revenue growth in FY2013-2014, but Zogby knows a lot can change in the next two months.  “Not the least of which is the fiscal cliff,” Zogby says, noting that sequestration alone could have a $300-million dollar impact on the Commonwealth.

Legislative Democrats have been critical of the governor’s first two spending plans, and they don’t see things changing during the coming budget cycle.  “We have suggested that jobs, education, health care and transportation are things to invest in,” says House Democratic Appropriations Chair Joe Markosek (D-Westmoreland).  “The Governor has suggested that corporate welfare is something that we ought to be investing in.”

Democrats say it’s showing up in the state’s tax receipts, where corporation taxes are running 18% above projection for the fiscal year, while sales and personal income taxes are lagging.

The fiscal cliff is more than just a federal issue.  The automatic spending cuts called for in federal sequestration could mean $60-million fewer federal dollars for Pennsylvania next year, and that’s just half of this so-called cliff.

Without Congressional action, a variety of tax increases will also take effect as of January 1st, which could raise a combined $600-billion dollars in federal revenue in 2013.

Those tax increases could have serious implications for the Pennsylvania economy.  “Pennsylvania comprises about 4% of US economic activity, so if we apportion that number to Pennsylvania, a very rough order of magnitude might suggest a tax increase of $22-billion dollars,” Independent Fiscal Office (IFO) Director Matthew Knittel explained on Radio Smart Talk.  “[That’s] a very rough order of magnitude and a worst-case scenario.”

Knittel believes Congress will take some action by the end of the year, just not full action, so he says a more realistic economic impact on PA would be in the $8 – $20-billion dollar range.”

The payroll tax cut alone would mean $5-billion fewer dollars for PA taxpayers.  “If one assumes that roughly 70% of that would have been spent, and roughly 40% would have been spent on taxable items, that tax increase suggests a roughly $70 – $80-million dollar reduction in sales & use tax revenues,” Knittel says.

The potential impact of the fiscal cliff was included in the IFO’s recently-released Economic & Budget Outlook, which projects lackluster growth in the Pennsylvania economy.