Governor Tom Corbett should be up and walking later this evening, and his surgeons expect a full recovery. Corbett suffered from spinal stenosis, a common condition which is marked by a narrowing of the spinal cord. The lower back procedure was conducted at Allegheny General Hospital, and lasted about an hour and a half. In a media briefing, Dr. Mark Fye said Corbett is taking pain medications and will likely have discomfort in his back for the next few days. “Our goal is to get him home to Shaler as soon as possible.” 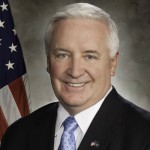 Dr. Fye expects the governor will be discharged on Tuesday. A statement released by Governor Corbett’s office indicates that he will recuperate for a few days at his home in suburban Pittsburgh, and should return to Harrisburg within the week. Lt. Governor Jim Cawley briefly assumed the duties of acting governor while Corbett was under anesthesia, but Corbett resumed the powers of the office around 10:30am.

The most common cause of spinal stenosis is the natural aging process. Corbett’s office says tests confirm the 61-year-old governor is otherwise in excellent health.

KQV contributed to this report.