Regardless of any additional reforms, executives from the state’s two big public pension funds are telling state lawmakers that adequate employer contributions are essential.  In this case, the state is the employer and its taxpayers are the ones footing the bill.

As it stands, the combined unfunded liabilities of the State Employees’ Retirement System (SERS) and Public School Employees Retirement System (PSERS) are north of $40-billion dollars and climbing.  The reasons are many: the 2008 market crash, a lost decade in which the state opted to defer its pension contributions, and a 2001 law that padded pension benefits – especially for lawmakers themselves.

Governor Tom Corbett is proposing a series of long-term pension reforms in hopes of reducing the short-term burden on the state, and PSERS executive director Jeffrey Clay was peppered with questions during House and Senate budget hearings on Wednesday.

“If you’re basically asking the question, “can we get to solvency under Act 120?” the answer would be – from the pension system perspective – yes.  The question is whether the state and the school districts can actually afford that,” Clay explains.

Act 120 of 2010 helped to smooth out the pension spike by reducing the benefits of future state employees and teachers, increasing the retirement age and extending the vesting period.  Even with those reforms being imposed for all new hires, the state’s $1.5-billion dollar pension obligation this year is expected to climb to $4.3-billion by FY2016/17. 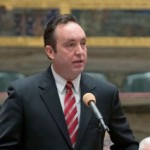 “The policy question for all of us sitting here is, “what are we willing to pay every year?”” said Senate Appropriations Chairman Jake Corman.  As lawmakers are finding out, that’s a question without an easy answer.

When addressing the issue of switching new hires to a 401(k)-style ‘defined contribution’ plan, the funds’ executives say any system will work as long as it is well-structured and well-funded.

But critics say that sort of switchover ignores the diminished rate of return for the defined-benefit plans that would still be paying out benefits for decades to come.  “Policymakers should ask the Corbett administration how much will be lost in investment earnings with pension restructuring and how much taxpayers will be on the hook when that happens,” says Keystone Research Center executive director Stephen Herzenberg.

The Corbett administration is banking on $175-million dollars in savings for the state, next year alone, through pension reforms.  They say PA’s 500 school districts would be able to save another $138-million.

Pennsylvania’s consumer protection laws effectively bar payday lenders from operating in the state, but they can’t stop unlicensed companies from targeting Pennsylvania consumers with their ads.  By locating out-of-state and doing business online, State Rep. Chris Ross (R-Chester) says these unregulated businesses can trap Pennsylvanians in a cycle of debt with their high charges.

Ross has introduced a bill that would create new short-term lending regulations in hopes of providing Pennsylvanians with a safer, less costly option.  “These are things that we’ve worked at with the Department of Banking and my colleagues in the Senate to try and provide as much protection as possible,” Ross explained to Radio PA.

HB 2191 would cap these short-term loans at 25% of a borrower’s paycheck, and require that an existing loan be paid off before a new one is obtained.  Another provision would enable eligible borrowers to obtain free credit counseling.

But critics believe the proposed cure is actually worse than the problem.  “It bumps the interest rate that you can charge on a small loan from where it is currently, which is around 24%, to 369%,” says Keystone Research Center labor economist Mark Price.  “That is a remarkable increase that will lead to the dramatic expansion of payday lending.”

Price is referring to the loan’s annual percentage rate (APR).  He uses the example of a $300 dollar, two-week loan.  Under the Ross bill, the borrower would be charged roughly $43-dollars.  Crunch the numbers for the course of a year and it brings you to the previously cited APR.

“We have the prospect now of hundreds of these payday lending storefronts opening up all across the commonwealth,” says Price.

Ross says unlicensed payday lenders are currently charging twice the maximum his bill would allow.  HB 2191 has already cleared the House Consumer Affairs Committee with a bipartisan vote of 20 – 4.  It now awaits further action on the House floor.

Pennsylvania’s jobless rate dipped one-tenth of a point to 7.4% in May.  Some economists are concerned about the numbers, because the seasonally adjusted number of non-farm jobs dropped by 14,200.

Mark Price, labor economist for the Keystone Research Center in Harrisburg says the May jobs report raises concerns that a renewed weakness in the national economy is being felt in Pennsylvania.

Price says the weakness was widespread in May’s state numbers; there was weakness in almost every major sector.  He says the public sector continued to shed jobs, and we have not seen the full impact of public sector layoffs because budgets are still being finalized.

Price says we will have to see if these numbers continue or if the May report is just a bump in the road. He points out Pennsylvania has added just under 80,000 jobs since the end of the recession.

He believes we’re still far off from the risk of a double dip recession, but Price says a bigger concern is growth remaining too slow.   He says that would signal a long, slow, painful recovery.  He says state and local governments would continue to struggle because they won’t have a lot of the revenue they had in the past and a lot of families will have trouble making ends meet. Price says what we need is much faster growth.