On this week’s Radio PA Roundtable, Matt Paul brings you the latest updates on the possible privatization of Pennsylvania Lottery management. Also, Governor Tom Corbett discusses his Thanksgiving holiday and we get a preview of deer season from the Pennsylvania Game Commission. 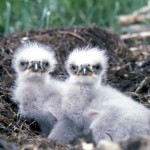 The number of bald eagle nests in Pennsylvania now tops 200.  The state Game Commission counts 203-nests in 50-counties.  “As recently as 1983 there were only three known nests, and they were all in Crawford County,” Game Commission spokesman Jerry Feaser tells us.

1983 was the year the Game Commission implemented its bald eagle restoration program.  From that restoration effort, Feaser says, PA went from 3 active nests in 1983 to 100 in 2006.  “Now here we are, just five years later, and we’ve more than doubled the number of active bald eagle nests.”

Crawford County still tops the list of bald eagle nests.  It and Pike County each have 19 known nests.  Lancaster County follows with 18.  None of those counties should be a surprise, because bald eagles thrive around major waterways.

This is the first year that the Game Commission has published an “Eagle Watching in Pennsylvania” guide, which you can find on their website.  “Pennsylvanians now have a greater opportunity of seeing a bald eagle, today, than any other generation since the Civil War,” Feaser says.

Meanwhile, nesting bald eagles have temporarily put the brakes on a road construction project in York County.  PennDOT says the work on Route 30 will resume in August, as they do not want to disturb the chicks.  Bald eagles are currently classified as a threatened species in Pennsylvania.  There are 10 known bald eagle nests in York County.