State lawmakers’ last act before the summer break was to send Governor Tom Corbett a bill to limit the Act 1 exceptions that allow school districts to raise property taxes above the rate of inflation, without a voter referendum.  Governor Corbett called it an essential bill of the budget season, and managed to cajole lawmakers into a compromise. 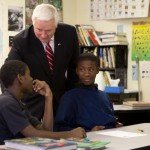 Appearing on Radio PA’s monthly “Ask the Governor” program, Corbett said the compromise should help keep school district spending under control.  Would he sign a bill to further reduce the remaining exceptions?  Yes.  “But, let’s take that half a loaf that we have right now and see how it’s working,” Corbett says.  The new law will take effect in July 2012.

Pension costs represent one of the big exceptions that lawmakers ultimately kept in the Act 1 law.  Corbett says the pension woes were created by years of underfunding.  “There are a lot of sins of the past that are being paid for now, by everybody,” Corbett adds.

Franklin & Marshall College political science professor Terry Madonna says it remains to be seen whether this new law will truly give PA taxpayers the chance to vote on property tax increases above the rate of inflation.  “One of the things that will play out will be whether or not this law… with two exceptions, whether those exceptions are meaningful,” Madonna tells us.

As Governor Corbett awaits the opportunity to evaluate the law’s success, he notes that taxpayers are also the first line of defense against out-of-control school spending.  “We’re in a municipal [election] year,” Corbett says, emphasizing taxpayers’ ability to elect their school board members.

Many school officials are already concerned that the new law will lead to additional reductions in educational programming.  They know it’s difficult to convince voters to approve any hike in property taxes.