A revamped version of SB 1 attempts to address three of the four tenets of the governor’s education reform agenda.  Throughout hours of Senate debate, Wednesday, there appeared to be broad support for the expansion of Educational Improvement Tax Credits and updates to the state’s charter school law.  However, a school vouchers program proved controversial.

“Over 90% of the kids are still going to be at the old school,” said Sen. Daylin Leach (D-Montgomery).  “They are just going to have less resources to try to eke out an education.”

The bill ultimately passed 27 to 22,and now heads to the House.  Governor Tom Corbett has not yet endorsed SB 1, but says he has been working with lawmakers behind the scenes.

School choice is not a new issue in PA, and it was no surprise when Governor Corbett included school vouchers in his education reform agenda. In fact, several protesters gathered in York in anticipation of what they were about to hear.  “65% of Pennsylvanians do not support using public money to pay private school tuition and only 11% of Pennsylvanians strongly support a voucher program,” says Cumberland County parent Susan Spicka.  “If the majority of Pennsylvanians do not support vouchers, I don’t know why he does.”  Spicka was citing a recent poll released by the Pennsylvania School Boards Association (PSBA).

“The issue is not that vouchers don’t work, the issue is the current system doesn’t work,” says Otto Banks, executive director of the REACH Alliance & Foundation, who says many students are trapped in failing schools simply because of their ZIP code.  “Vouchers are simply a means to an end,” Banks tells Radio PA.  “It gives a child an opportunity, or access to a quality education.”  REACH strongly supports the governors’ education reform agenda.

The new education paradigm that Governor Tom Corbett envisions would put students first.  While visiting the Lincoln Charter School in York, Corbett put forth a four point plan that he wants to see implemented in time for the 2012-2013 school year.

Controversial school vouchers also make an appearance, but they would only apply to low-income students in the lowest performing 5% of PA’s schools.  “Students whose families earn 130% or less of the federal poverty rate would be eligible for these scholarships,” Corbett says.  “To give that to you in dollars and cents, that’s a family of four earning $29,000.”  Students who come from families earning slightly more would be eligible for a portion of the so-called opportunity scholarships.

The new teacher evaluation program that Corbett envisions would include student performance.  “Right now the evaluation system is merely a rubber stamp, and it must change if our students are going to be the beneficiaries of good, committed educators,” Corbett says.  The current system allows only for a satisfactory or unsatisfactory rating.  The new system that’s currently being piloted would allow for ratings that range from distinguished and proficient, to needs improvement and failing.

Corbett concluded that he’s not happy with the status quo.  “When we have failing schools, we have failing students,” he says, pointing to the School District of Philadelphia’s 45% drop out rate.  Reaction to the Corbett agenda is rapidly pouring in; check back later for a recap. 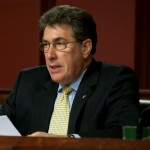 Pennsylvania’s charter school law was considered one of the nation’s best when it was enacted in 1997, but 14-years later many are calling for reforms.  “A number of states… have surpassed the Commonwealth of Pennsylvania in adopting stronger charter laws, all with the goal of making charter schools more viable and a high quality option,” says Senate Education Committee Chairman Jeffrey Piccola (R-Dauphin).  Piccola convened a capitol hearing, Thursday, on his comprehensive, 145-page charter school reform legislation.

The bill has been two years in the making and has some bipartisan backing.  Minority Chairman Andy Dinniman (D-Chester), one of the bill’s cosponsors, says it insists on transparency and accountability.  “We say, are you fiscally accountable?  Do you provide what you need to provide at the best cost and in the most productive manner?” 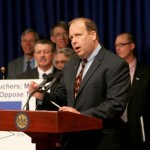 The committee’s charter school reform push isn’t without its critics though.  The Pennsylvania School Boards Association testified that almost all charter school funding is provided by the districts, and SB 904 does not provide any meaningful funding reform.  State Senator Daylin Leach also raised concerns about the impact on the schools that students are leaving.  “It is a net loss to the school, and since the school is just a building, it is a net loss to the other students who are in that school.”

Sen. Piccola anticipates action on charter school reform this fall.  Other big education issues, on the horizon, include school vouchers and mandate relief.

Ron Tomalis told the Committee we must ask ourselves why we force parents to send their children to a particular school rather than allow them to choose another school that might meet their needs.  He says students in the lowest 5% of schools, based on the combined math and reading scores in the Commonwealth, should have the opportunity to use state funding to attend another public school or a participating nonpublic school.

Tomalis says the program must be targeted to students trapped in failing schools and be accountable to taxpayers. He says only the state portion of funding would follow the child.   He says the administration believes choice needs to be phased in.

Tomalis says students taking advantage of choice should be held to standards and should be required to take an assessment to measure their academic achievement.

Tomalis says school choice is not just public to private.  He says public to public choice is an important aspect of the choice program. He says they should promote the ability for students to transfer across district lines. He believes school districts will embrace the potential for public to public choice.  But he says it would be difficult for him to support a mandate that schools participate.

Tomalis also told the committee the administration is looking at taking the growth of student achievement into account when identifying whether schools are hitting their targets.  He says growth has to be part of the mix.

The head of the Pennsylvania State Teachers Association  is questioning how the Corbett  administration could support school vouchers.  In a statement, James Testerman said “This kind of spending is reckless, ill-advised, and dangerous for the students who learn in Pennsylvania’s public schools.”

There are several school choice measures before the legislature, including Senate Bill 1 and several measures in the house.