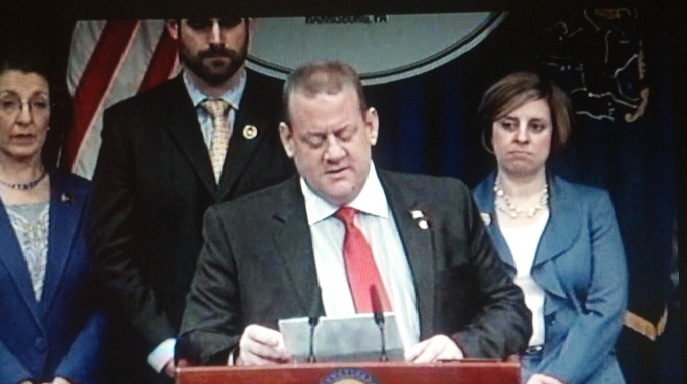 A state representative has reintroduced an anti-bullying measure called the PASS act.  The bill is aimed at prevention and increasing the reporting of incidents.

Representative Dan Truitt’s (R-Chester) bill would require  would require the state to develop a model policy to more clearly define bullying and what should be done in response.  Schools could adopt that policy or formulate one of their own.  The bill also calls for an on line reporting and tracking system to make sure bullying is addressed when it happens.

Truitt says the legislation seeks to ensure every public school teacher will know how to identify bullying and what to do about it.  He says it does not create yet another unfunded mandate on struggling schools.

Goodman says if students don’t feel safe in their classrooms, how can they learn?  He says students who are harassed in school are more likely to drop out, skip school, develop anxiety and depression and consider self harm or suicide.

Tammy Simpson lost her 14-year-old son to suicide.  He left a note saying he’d been harassed for 5 years and couldn’t take it anymore. She says she did not know her son was having issues.  She says we need to put things in place to protect our kids.

Representative Jim Roebuck (D-Philadelphia), minority chair of the House Education Committee, called the issue a moral imperative and said there is an urgency involved in protecting students from bullying.