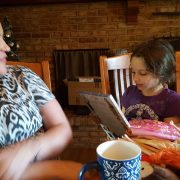 Pennsylvania enacted a medical marijuana law earlier this year and that has been the greatest gift of all this holiday season for families of children suffering from severe seizure disorders.

In this special Radio PA documentary, “Experimenting with Hope,” you’ll meet two of these families and the children who are already benefitting from this statutory change in the Keystone State. Radio PA was invited into their homes this year, where we met Lolly and her daughter Anna, and Dana and her daughter Lorelei. Hear about their longtime struggles to counteract the severe seizures that disrupted every facet of their lives and the uphill battles to simply be heard by their elected representatives. You’ll also hear from the Republican lawmaker largely credited with breaking the ideological logjam on this issue in Harrisburg, state Senator Mike Folmer (R-Lebanon), who has formed an powerful and emotional bond with these families.