Congress still has a few days to act, but compromise on a federal deficit-reduction plan appears to be less likely by the hour.  Radio PA’s Matt Paul caught up with US Senator Bob Casey (D-PA), Tuesday, to discuss the so-called sequester:SEQUESTER 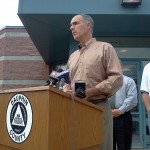 Casey’s reference to 78,000 lost jobs in the Keystone State is based on a 2012 study from George Mason University.  The other consequences Casey alludes to are largely based on data released by the White House this week.