Advocacy manager Ray Landis says the transfer would take money away from home and community-based programs for older adults and give it to mostly nursing homes for long term care. He says the lottery funded “Options” program has had stagnant funding for a number of years and in many counties, there’s already waiting lists for these services.

Landis says keeping people at home where they want to be is better for everyone, including taxpayers. He says we can pay for two and a half people to stay at home, for the cost of one person to have to live in a nursing home. He says the longer they can keep people at home, the better it is for everyone.

Landis says if we don’t do all we can to keep older Pennsylvanians at home, it’s going to cost all of us as taxpayers a lot more money to have people go to nursing homes. 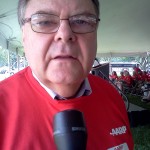 Between 800 and 1,000 Pennsylvania members of AARP gathered on the state capitol lawn, Tuesday, for their annual lobby day.  All donned red AARP t-shirts.  State director Dick Chevrefils says they came to share their voices with the legislature about the issues that are important to the AARP.  “There’s a family caregiver piece of legislation that’s in both the House and Senate that we’re hoping is going to pass because it’s going to make a big impact on people that have the responsibility of caring for a loved one.”

The bills (HB 210 and SB 639) would allow neighbors and friends to enroll in the Family Caregiver Support Program, which is currently only open to relatives.  It would also increase the maximum monthly reimbursement from $200 to $600.  “It’s not going to cost the state any additional money… the funds are already there,” Chevrefils tells us.  The program is funded through state lottery revenues and federal sources.  Both bills have already passed the committee level and await additional action in their respective chambers.

AARP members are also paying close attention to the state budget debate.  “We’re waiting to get a full picture of the budget, but at this point it’s basically watching and making sure we’re protecting the people of Pennsylvania,” Chevrefils says.  Their goal is to ensure there’s no loss to the funding for services that help people maintain their independence and stay in their homes: “When you see that sea of red, it’s the collective power of people coming together.  These people care about everybody – not only older people – but children, families, people with disabilities.  It’s all about people.”