The Legislative Reapportionment Commission has approved a new final plan for redrawing state house and senate lines; more than four months after the state’s highest court rejected the first plan.  But Senate Democrats are still not happy with the plan.

Senate Democratic Leader Jay Costa voted against it, saying it still had too many unnecessary county splits.  He says multiple splits were added for pure partisan advantage.  He called the map a total disappointment and says it’s another gerrymandered map.

Senate Republican Leader Dominic Pileggi said they eliminated many splits from the earlier plan. He adds his caucus did agree on a number of changes requested by Democrats.

The plan also moves five house seats, but both caucus leaders voted in favor of it.  Democrat Frank Dermody said it meets the constitutional requirements.   Seats  will move from Philadelphia to York, from Lackawanna/Luzerne to Monroe, from Pittsburgh to Allentown, from Clearfield County to Chester County and from Crawford/Erie to Berks.

The new maps would not take effect until the 2014 election cycle.

A jury is in place for the child sex abuse trial of Jerry Sandusky, with the case set to begin next week.    It took a little less than two days to pick a panel to hear the charges against the former Penn State assistant football coach.

The panel of 12 jurors and 4 alternates was picked from a group of about 80 questioned by the attorneys and Judge John Cleland.   The main jury consists of 7 women and 5 men.  Many of the jurors have ties to Penn State University.

Opening statements by prosecutors and Sandusky’s defense lawyers are scheduled to begin on Monday morning.  The judge turned down another request for a continuance during jury selection.

Today marks the 68th anniversary of the D-Day invasion and the likeness of one heroic Pennsylvanian is helping to pay tribute to many who sacrificed and risked everything that fateful day in 1944.

Hershey, Pennsylvania native Dick Winters was a member of Easy Company, 2nd Battalion, 506th Parachute Infantry Regiment of the 101st Airborne when he parachuted into the town of Saint Mere Eglise. That event and the exploits that followed would eventually be chronicled by historian Stephen Ambrose in the book Band of Brothersand the HBO mini-series of 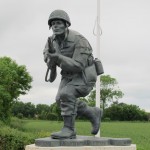 Pennsylvania native Dick Winters will stand watch over Normandy as a tribute to all junior U.S. military officers who stormed the beaches or jumped into France in 1944

the same name. Winters died last year, but he has become so respected his likeness is featured in a new monument that was dedicated at Normandy today. The statue honors the leadership of all junior U.S. military officers who stormed the beaches or jumped into France in 1944.

Planning for the monument took more than two years, but many agree that Winters is a fitting representative of the brave men who landed and jumped on D-Day. Major General James McConville is the commanding general of the 101st Airborne Division. He says Dick Winters personifies what a leader is all about.

Several family members of Easy Company veterans were on hand for the statue dedication.