The new “Kids Count” data book from the Annie E. Casey Foundation ranks Pennsylvania 20th among states for children’s health and overall well-being.  That may be an improvement over PA’s previous ranking of 23, but it’s not all good news.  “The poverty rate for children in Pennsylvania is now 17%,” says Patrick McCarthy, President and CEO of the Annie E. Casey Foundation.  “That was an increase in Pennsylvania, compared to the year 2000, of 13%.”

McCarthy says Pennsylvania is generally following national patterns in which the five health indicators are headed in the right direction, and the five economic indicators are headed in the wrong direction.  Two indicators in particular alarm Joan Benso, President and CEO of PA Partnerships for Children.  “The number of teenagers who are not in school and not working, and the number of children living with at least one unemployed parent jump out at us as indicators that we need to really address and do more to help families overcome,” Benso says.

Data contained in the “Kids Count” report show that 10% of Pennsylvania children have at least one unemployed parent, and 8% of PA teens are neither attending school nor working.  Both numbers are slightly lower than the national averages of 11 and 9%, respectively.

Benso says the report demonstrates the need for an aggressive strategy to reengage Pennsylvania’s dropouts, so that they can become productive members of the workforce.  She adds that now is not the time to reduce funding for programs that help kids develop.

Dr. Matthew Davis is director of the poll.  He says childhood obesity has been at the top of the list for several years running, but now drug abuse has joined it as a top health concern.  He says compared to the mid-1990s, drug abuse is substantially less. But he says in the last few years , the use of marijuana and other drugs has started creeping up again among youth, and this is a concern to the public.

Dr. Davis says public health and school campaigns have made a dent in youth smoking, but the public remains very concerned about tobacco use among youth.

Dr. Davis says when something is as widely available as the Internet or cell phones, parents need to grapple with what the risks can be from the new technologies.  He adds others are also concerned about Internet safety and sexting.

For African Americans, gun related injuries, school violence and unsafe neighborhoods replaced bullying, internet safety and stress on the list.  Hispanic adults listed child abuse and neglect as a top ten concern and sexting did not make their list.

Dr. Davis says it’s important that those in the medical, public health and public policy communities recognize how people from different backgrounds are seeing these problems.  He says if they’re getting a sense of what’s most important to people, they can focus their prevention efforts in those areas. 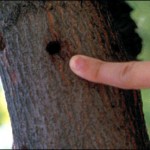 Exit hole made by an Asian Longhorned Beetle.

A destructive beetle has been found in another nearby state, raising concern that it could eventually make its way into Pennsylvania and threaten popular landscaping and hardwood industry trees.   The Asian Longhorned Beetle has now turned up in Ohio. The invasive beetle has already been causing problems in two other border states, New York and New Jersey.  It has also been found in Massachusetts and Illinois.

Leo Donovall, Coordinator of the Invasive Species Council and a plant inspection specialist with the Pennsylvania Department of Agriculture, says the beetle will attack many different types of trees, but especially prefers maples.

Donovall says the female lays eggs under the bark of trees and will continue to colonize a tree until it dies. The beetle has been showing up mainly in urban settings, so they want people to be on the lookout.

The beetle is about an inch long, with a jet black glossy body and white  spots on its wings.  It has long antennae. Signs of damage include pitting on the outside of the tree, round exit holes, sawdust piles collecting in the crooks of branches or at the base of the tree, and weeping of sap from exit sites. People spotting these should contact the State Agriculture Department’s pest hotline at 1-866-253-7189, or email to Badbug@state.pa.us.

Donovall asks that people report any and all sightings.  He says if you can collect the suspect beetle, it will help them make identification.  He says if you have to kill it, try to collect all of the parts. He says you can put some rubbing alcohol on it and put it in a jar to deliver to the Department of Agriculture.  He says they need to have a specimen for a positive sighting.  He says they would also need a specimen to take action in an area where an infestation is suspected.