On this week’s Radio PA Roundtable, Pennsylvania received some bad news as its credit rating was downgraded. Drivers on the PA Turnpike received some good news regarding the speed limit on a 100-mile stretch of the toll highway. And are we finally able to see what the cars of the future will be like?

The CEO of the Pennsylvania Turnpike Commission will step down at the end of the month.  Roger Nutt cited health concerns in his letter of resignation.  Turnpike Commission Chair William Lieberman had mixed emotions in his response, but recognized the move is in the best interest of Mr. Nutt’s long-term health.  Nutt was named Turnpike CEO in March 2011.

It was under Nutt’s leadership that the Turnpike Commission has taken the next steps toward All-Electronic Tolling.  Just last month Nutt testified before the House and Senate Transportation Committees, asserting the Turnpike’s finances are solid.

Members of the House and Senate transportation committees got a crash course on Pennsylvania Turnpike finances this week.  But it’s a good thing there was no pop quiz, because many of them were left with more questions than answers.  “My head is spinning. Is there a crisis or isn’t there a crisis?” asked Rep. Mike McGeehan (D-Philadelphia), minority chairman of the House Transportation Committee.

Auditor General Jack Wagner urged the panel to repeal Act 44 of 2007.  While the tolling of Interstate 80 never came to be, the transportation funding law still calls for the Turnpike Commission to make annual payments of $450-million to PennDOT.  “The Turnpike Commission, with debt of $7-billion and growing, is clearly drowning in debt due to the burdens placed on it by Act 44.”

Wagner says Turnpike debt has increased 181% in the five years since the law was enacted.  “This is all unacceptable because the Turnpike, quite frankly, isn’t going to survive if this continues,” Wagner testified.

But Turnpike officials are adamant there is no financial crisis.  “We have a developed a sound, fiscally responsible approach to meeting all of our financial obligations, including the $450-million annual payments to PennDOT,” explained Turnpike Commission CEO Roger Nutt.

Wearing his hat as a member of the Pennsylvania Turnpike Commission, PennDOT Secretary Barry Schoch explained their annual debt service is only $35-million dollars a year, compared to the $450-million dollar fund transfer to the state.  Over time, Schoch says, the revenue raised from annual toll increases will exceed the debt service, allowing the commission to pay down the debt.

After meeting for two hours, Senate Transportation Chair John Rafferty (R-Montgomery) announced that a second hearing will need to be scheduled.  The one thing lawmakers and testifiers all seemed to agree on is that Pennsylvania must address its transportation funding crisis… with or without Act 44.

Turnpike speed limits max out at 65-miles per hour.  The limit is set by state law, but the House Transportation Committee has advanced a change that would give the Turnpike Commission the authority to raise speed limits up to 70.

“It doesn’t mean that it has to,” says Rep. Joe Preston (D-Allegheny), the bill’s prime sponsor.  “But to be able to give the latitude, if it so chooses in the different areas that have changed or improved, they can raise it from 65 to 70.”

The Pennsylvania Turnpike Commission doesn’t have an official position on the bill, but spokesman Carl DeFebo says roadway improvements – like wider medians and shoulders – do tend to be more conducive to higher speed limits.

Preston’s bill received an 18 – 4 vote in committee this week.  All four negative votes were cast by Democrats.

Imagine a Turnpike with no toll booths.  A new study concludes that vision to be feasible both financially and physically.  The first advantage cited in the Turnpike’s feasibility study is safety, because motorists would no longer have to slow down, jockey for position and merge at every toll plaza.

“We’re also looking at a cleaner environment, improved convenience because you don’t have to slow down, and certainly – as the study points out – operational efficiencies because it’s a much less expensive way to collect a toll,” Pennsylvania Turnpike Commission Carl DeFebo explains.

But the 39-page document does note several disadvantages as well.  For instance, a high initial cost of conversion and the number of images to be processed in order to bill non E-ZPass customers.  An All-Electronic Toll system would likely involve photos being snapped of non E-ZPass vehicles; the owners would then receive an invoice for the required tolls.

E-ZPass users currently pay about 17% less than cash-paying Turnpike travelers.  DeFebo says they would continue to pay a lower toll rate based on the higher cost of processing invoices for non E-ZPass users.

With the new study in hand; the Turnpike Commission will hire a program management firm to oversee the next phase of the study process.  “This is a minimum five year process,” DeFebo says, noting they could encounter a number of ‘stop signs’ along the way. 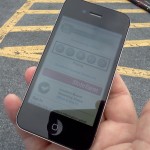 Keeping with the Turnpike’s plea to ‘keep your thumbs on the wheel,’ the new TRIP Talk app is both hands-free and eyes-free.  “As you move through the Turnpike or toward the Turnpike, using GPS location, it will read you – verbally – read you and alert of traffic situations that you’re coming upon,” says Turnpike COO Craig Shuey.

The Turnpike partnered with Philadelphia-based Voicenet to develop the cutting-edge application, which provides Turnpike travelers with real-time information.  “Basically, as soon as we know it… it’ll pop up… and you’ll hear it,” Shuey says.

The Pennsylvania Turnpike Commission is announcing the new smartphone app just in time for the busy Labor Day travel weekend.  Spokesman Bill Capone estimates that more than 2-million motorists will use the Turnpike over the Labor Day travel period.

Users are advised to launch the application before hitting the road.  State Police Troop T Commanding Officer Kathy Jo Winterbottom says it will enhance the safety of all Turnpike travelers.  “I applaud the Turnpike Commission’s efforts to develop this new way of telling drivers what lies ahead on the highway.”

The free smartphone app is available for android or iPhone devices.  No registrations or subscriptions are necessary.

Everything was running smoothly on the Turnpike when this reporter tried to fire up TRIP Talk on Friday morning, but the Turnpike Commission loaded a Labor Day message so we could give it a test drive.