The overall financial picture for Pennsylvania’s hospitals is mixed, with tighter operating margins and uncertainties over the full impact of the federal health reform law.

The Pennsylvania Health Care Cost Containment Council saw a decline of more than 1% in the statewide total margin for the 171 General Acute Care hospitals for fiscal year 2012. The decline was due in part to lower non-operating income, primarily from investments.

PHC4   Executive Director Joe Martin says they also saw an increase of more than 6% in uncompensated care. He says the number has pushed past the one billion dollar mark.

The full report is available at the council’s website.

Pennsylvania hospitals would be required to meet minimum nurse-to-patient ratios under bills introduced in the state House and Senate.  The ratios would vary depending on the care setting, but supporters say they could both improve patient safety and save money in the long run.

Eakin points to a 2010 study out of the University of Pennsylvania that indicates California’s mandatory minimum nurse-to-patient ratios are helping to save lives.

But California is the only state to go down this road to date, and Pennsylvania hospitals have long opposed similar bills that have been introduced in the General Assembly.

The Hospital & Health System Association of Pennsylvania says a one-size-fits-all policy ignores the many variables involved in determining safe staffing levels.  HAP also contends there’s no consensus on what nurse staffing levels should be or how to set them.

Children’s Miracle Network Hospitals want you to check out a new holiday catalog full of electronics and toys.  I know what you’re thinking… But these electronics include heart monitors to check the vital signs of sick babies, and these toys are used to brighten a child’s day during a long stay at the hospital.

The Give Miracles campaign uses crowdfunding to add a twist of social media to your holiday gift giving.  “What if people could actually get together and donate in groups of people,” asks CMN Hospitals Chief Concept Officer Craig Sorensen, “maybe you have $20 to give, $100 dollars to give, or $100,000 dollars to give to your local Children’s Miracle Network Hospital, but you could go all in together and crowdfund an item.”

The platform being used for the Give Miracles campaign is Fundly, and CEO Dave Boyce says the model treats the $100 dollar donor like the $100,000 dollar donor.  “The thing that’s frustrating for most of us mere mortals who donate $50 or $100 at a time is that we never know where our money goes, and we never get any of the psychic benefit that we thought we were going to get from donating,” Boyce explains.

That’s all changing now, because donors will not only choose which hospital they want to support – but they’ll decide where they want their money to go, and whether to fund a specific need completely or become part of a larger project.  Campaign subscribers then receive regular updates on their chosen project, which allow them to track where their money is going and who else in their social networks is joining them. 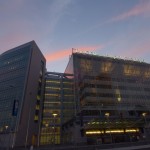 Children’s Hospital of Philadelphia is actually one of eight hospitals, nationwide, which are being featured for an Ultimate Gift.  “We have one of the very best autism research and treatment programs in the world,” says CHOP’s Chief Development Officer Stuart Sullivan.  “We thought if we got a significant investment from a donor we could do even more.”  Their goal: $7.5-million dollars.

Children’s hospitals help more kids than any other organization in a community, according to Craig Sorensen, who also notes that they aren’t always top of mind as a cause organization.  That’s why Sorensen hopes the Give Miracles campaign becomes an annual tradition.

Dr. Frieden says only 14% of hospitals have a written model policy, including helping mothers initiate breastfeeding within an hour of birth, having infants room with their mothers, not giving newborns formula feedings unless medically indicated and offering follow up support.  He says less than half of U. S.  babies are breastfed at all during the first six months of life. Only 15% of mothers breastfeed exclusively for six months.

Dr. Frieden says breastfeeding lowers the risk for infections, Sudden Infant Death Syndrome, diabetes and obesity for the child.  As a result, he says breastfeeding results in lower health care costs. He says there are also health benefits for the mother, by lowering the risk of breast and ovarian cancer.

Dr. Frieden says if the United States does not accelerate the current slow improvement in practices, most of the next few generations will be born in hospitals that don’t effectively support women who want to breast feed.