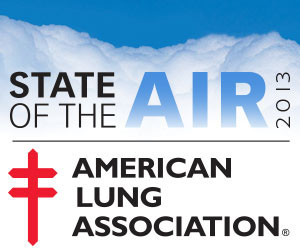 Overall, the American Lung Association’s annual State of the Air report is a mixed score card for Pennsylvania. The air is cleaner than it was a decade ago, but some regions have air quality issues that rank among the nation’s worst.

The Pittsburgh area is on all three of the association’s worst 25 U. S. cities lists for ozone, annual particle and daily particle pollution. The Philadelphia area makes two of the lists and even the Harrisburg area is on one.

The Lung Association is concerned about proper controls to avoid dangerous emissions from drilling for natural gas.  Stewart adds there’s been another trend toward dirty combustion sources, such as outdoor wood burning boilers, that bears attention.

You can read the full report at http://www.stateoftheair.org/2013/states/