On this week’s Radio PA Roundtable, Brad Christman and Matt Paul remind you to pay that state sales tax when purchasing items online, as the state focuses on stricter enforcement of the existing law; also on this Labor Day weekend, you’ll hear the results of the “State of Working Pennsylvania” report; and we’ll give you a sneak peek into the new Joe Paterno biography that hit the book stores this week.

The Pennsylvania Turnpike Commission is sitting on $7.3-billion dollars in long-term debt, according to Auditor General Jack Wagner, and state Rep. Peter Daley (D-Washington/Fayette) is calling on two top Turnpike officials to resign.

In a letter sent to the Turnpike Commission, governor’s office and every member of the state House, Daley said it’s time for Turnpike CEO Roger Nutt and COO Craig Shuey to go.  “They have been trying to play this shell game long enough,” Daley said in an interview with WJPA-FM.

The rise in Turnpike debt can be attributed to a 2007 transportation funding plan known as Act 44.  The law, which Daley voted for, called for the tolling of Interstate 80.  While Pennsylvania never received approval for I-80 tolls, Act 44 still calls on the Turnpike Commission to make annual payments of $450-million dollars a year to PennDOT.

Daley’s letter acknowledges that Act 44 has added to the Turnpike’s woes, but he still believes that a lack of leadership is to blame, saying the Turnpike needs to put expensive new capital projects on hold.

While a Turnpike Commission spokesman declined to comment on Daley’s letter, he did provide us with a statement from Roger Nutt regarding their debt obligations.  It reads:  “I reassure you, there is no looming financial crisis at the Turnpike Commission; we continue to receive favorable bond ratings, and we fully intend to meet all funding obligations to PennDOT – as we’ve done for the past five years.”

Daley says a House committee is expected to take a closer look at the Turnpike debt situation in the weeks ahead.  “We’re going to be asking that a special committee be set up to oversee what’s going on in the Turnpike Commission and to render a report back to the legislature” 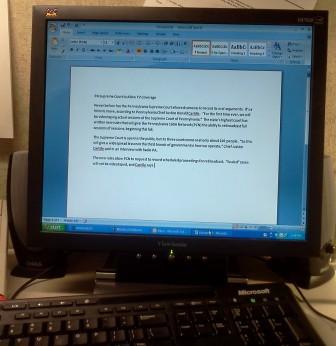 Ann Romney stole the show, Tuesday night, at the Republican National Convention in Tampa.  That’s not just this reporter’s opinion from watching hours of live C-Span coverage; that’s what the folks at Google tell me.  Abbi Tatton with the Google Elections Team says Ann Romney apparently succeeded in showing off the warmer, softer side of her husband because the subsequent deluge Google searches focused not just on her name – but on the personal details of her family.

Google searches for Ann Romney on Tuesday night topped those for her husband by 50%, and easily bested the number of searches for New Jersey Governor Chris Christie who actually delivered Tuesday’s keynote address.  In Gov. Christie’s defense however, I couldn’t even stay awake long enough to catch the start of his post-10:30pm speech, let alone do any web searching about it.

Republicans will likely be pleased to hear that Google trends show an increasing number of searches for Mitt Romney and Paul Ryan in key states like Pennsylvania.  However, they still lag the overall number of searches related to President Barack Obama.  Also, they’re not always about politics.  “As the top related search term around Paul Ryan’s name, over the last couple of weeks, has been shirtless,” Abbi Tatton says. “People seem to want to see what this potential vice president will look like without his shirt on.”

That’s apparently a tip of the cap to Mr. Ryan’s well-known regard for a high-intensity workout routine called P90X.  While my own Google search for “Paul Ryan Shirtless” turned up 1.34-million results in a fraction of a second, I declined to click on any of them.

The Google Elections Team will be at the Democratic National Convention too, and we’ll check back with them next week for a look at what’s trending in Charlotte.

As Pennsylvanians approach the unofficial end of summer this Labor Day weekend, many will be setting out for one last road trip before fall. AAA Mid-Atlantic expects holiday travel to be up about 2.3% in this region over last Labor Day, with most people traveling by car despite higher gasoline prices and a sluggish economy.

Jenny Robinson from AAA says dining out, visits to relatives and shopping will top many holiday lists this weekend, with round-trips averaging about 744 miles. As of Wednesday, the statewide average for a gallon of regular unleaded gasoline is $3.78.

For the 8% or so expected to travel by air, Hurricane Isaac could throw a wrinkle into your travel plans, especially if you’re planning to fly to the south or Midwest. The storm was already disrupting travel the past several days, and after making landfall last night in Louisiana, the system is expected to amble north through Arkansas and Missouri and then into Illinois and Indiana.

Pennsylvania is part of the pilot program for a proposed national network of manufacturing institutes.  The National Additive Manufacturing Innovation Institute (NAMMII) is a public-private partnership that spans PA, Ohio and West Virginia.  The Department of Defense is putting up $30-million dollars to help fund the institute; another $40-million dollars is coming from a broad base of consortium members.

Eight Pennsylvania universities and community colleges are a part of the consortium, including Penn State.  “The concept is to try to utilize universities and industry together to try to advance technical issues and barriers that are impeding manufacturing from being competitive in this marketplace,” says Wayne Figurelle, director of industrial innovation programs for the College of Engineering at Penn State.

Resnick and Figurelle tell Radio PA that the Department of Defense is especially interested in additive manufacturing because it’s cost-effective, mobile, and allows for production in limited quantities.

Resnick expects big things if they can harness the energy of the 40-companies, 9-research universities, 5-community colleges and 11-nonprofits who are participating in the pilot project.  “We not only hope to create jobs, but we hope to create region that is similar to the Silicon Valley for electronics or the Research Triangle in North Carolina.”

NAMMII is the first of what President Barack Obama has proposed as a billion dollar network of 15-manufacturing institutes.  Expansion of the program would require congressional approval.

On this week’s Radio PA Roundtable, Brad Christman and Matt Paul preview Penn State’s attempt to shift focus from off-the-field disasters to the team that will take the field next Saturday for the 2012 season opener against Ohio University. You’ll also get an update on a select committee on property taxes and hear details about the report generated by the governor’s Advisory Committee on Manufacturing.